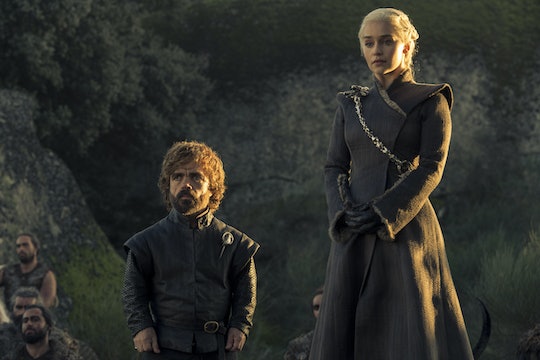 In Season 2 of Game of Thrones, Daenerys visited the House of the Undying in Qarth and had a memorable vision of her potential future. In the books (though it wasn't shown on the series), she learned from her dead brother Rhaegar about an important prophecy regarding her dragons. But in light of recent events, what does Viserion’s ice dragon fate mean for Daenerys’ prophecy? It changes a lot of things in terms of what fans have already presumed or theorized to be true.

In the vision, she was following the sounds of her three baby dragons’ cries, but she also saw a lot on the way, including an open gate to the other side of The Wall, the Throne Room in King’s Landing, and Khal Drogo with their unborn son in his arms. Although these made it to the show, the prophecy from the books did not, even though fans are still standing by it. In the books, someone presumed to be Rhaegar appears in Daenerys’ vision, holding a baby. He says, "There must be one more… The dragon has three heads."

With that line from the prophecy of the dragon having three heads, GoT fans began speculating on who the other two heads of the dragon could be if Daenerys is clearly the first. Since it’s pretty much been confirmed that Jon is Rhaegar and Lyanna Stark’s son, he would be the second head of the dragon, but the third was always in question. Considering how the Night King just turned Viserion into a wight, I'd say that may no longer be the case.

There was a strong held theory that, unbeknownst to him, Tyrion is a Targaryen and meant to be the third head of the dragon. One of the main proponents of the theory was the fact that the Mad King Aerys Targaryen had been obsessed with Tyrion’s mother when they were alive and that he may have raped her, resulting in her pregnancy with Tyrion.

Another part of the theory backed up the claim, pointing out that when he killed his father, Tywin told Tyrion, "You are no son of mine." It could have just been one last insult because, hey, Tyrion had just shot him with a crossbow after all. But it could also be because Tywin had always suspected that Tyrion wasn’t his true born son. But now that Viserion is set to be the first ice dragon ever on Game of Thrones, it kind of changes things.

Since fans have long speculated that Tyrion would be the one to ride Viserion, while Jon was meant for Rhaegal, it kind of puts things in a tailspin. It almost totally throws away the Tyrion Targaryen theory and points to the Night King as being much more important than he was before.