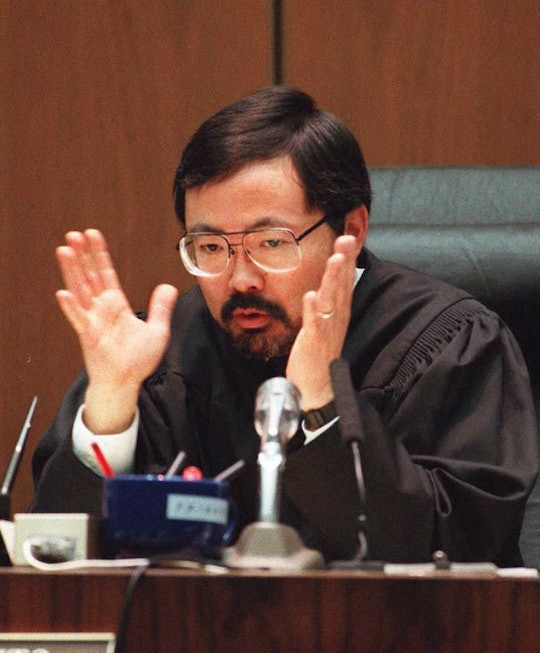 What Has Lance Ito Said About Mark Fuhrman? The 'O.J. Simpson' Judge Was Honest About A Potential Bias

This Tuesday's episode of American Crime Story: The People vs. O.J. Simpson is dedicated to tapes unearthed by the defense, which show that Detective Mark Fuhrman using the n-word, which contradicts an earlier claim he had made in the trial where he said he hadn't used the n-word in the past 10 years. The Fuhrman tapes contained another notable revelation which nearly derailed the whole O.J. Simpson trial: insults hurled at LAPD Captain Margaret York, who just so happened to be presiding Judge Lance Ito's wife. So, what does Judge Ito think about Mark Fuhrman?

While the tapes helped support the defense's narrative claim that evidence was planted against O.J. Simpson, before the tapes could be considered admissible in court, it had to decide whether the content of the tapes against Ito's wife would cause a conflict of interest. The tapes themselves revealed conversations Fuhrman had with a filmmaker named Laura Hart McKinney, in which drops the n-word several dozen times and discusses "making up the rules" and "doing what you have to do" to put criminals in jail. In addition to the multiple racial slurs and disturbing attitudes towards people of color the tapes contained, Fuhrman also talked about his former superior, Captain Margaret York, who, at the time, was the highest ranking female officer in the entire LAPD. According to The New York Times, he can be heard insulting her appearance and suggesting she used sex "to advance her career."

The defense obviously thought these tapes were relevant to building a case of institutionalized racism, but the prosecution urged Judge Ito to recuse himself if they were to get a ruling on their admissibility, because of the comments made against his wife. And, for his part, Ito agreed that having his wife trashed in evidence would present bad optics if he stayed on as the presiding judge. Said Ito during the trial while considering whether or not to proceed:

I love my wife dearly and I'm wounded by criticism of her, as any spouse would be and I think it is reasonable to assume that that could have some impact.

However, they were also several months deep into the trial at this point, and if he had recused himself, the case could have essentially had to start all over again as the prosecution and defense got a brand new judge up to speed.

For their part, the defense pointed out that the tapes would offend most judges, and that there would therefore be some bias at play no matter who ruled on their admissibility. Said Johnnie Cochran during arguments, "[Fuhrman] has something for everyone. If you send it to a woman, he hates women, you can't send it to a black, he hates blacks, he hates Mexicans, he hates Jews, he hates anyone who is not an Anglo-Saxon white police officer."

And so, Judge Ito stayed on, though another judge temporarily stepped in to make calls about the tapes that affected Margaret York, which, at the time, legal experts and scholars agreed was the right call. Ito was widely regarded as being a thoughtful, patient, and conscientious judge throughout the whole trial.