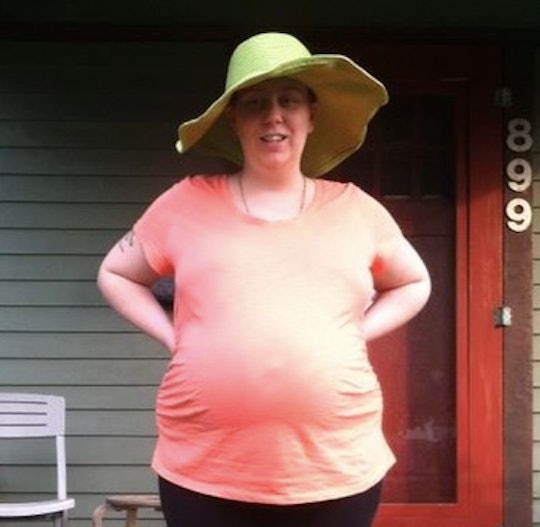 What I Learned About Body Positivity During My Pregnancy

I am a fat woman. I’m also a new mom. I wasn’t always fat; I gained a lot of weight in my mid and late 20s and I had to learn how to get comfortable in my skin all over again. Fortunately for me, I had a lot of amazing fat-activist and body-positive friends and acquaintances all around me. Losing my thin privilege and encountering fat phobia was hard on me, but not nearly as hard as it would have been without their support. After all of that, though, I still was not prepared for how pregnancy would change me. Pregnancy changed the way other people looked at — and talked about — my body. Pregnancy changed the way I felt in my own body, and what I valued about it. And ultimately, after it was all said and done and my baby was finally on the outside, it helped me to love my body more than ever before.

Prior to being pregnant, I thought that I was extremely body positive. I thought that all bodies were good and valuable, and I loved my body and was proud of it. I was aware of the trope of the “good fatty,” and thought that all fat people, including myself, could be good and beautiful. However, once I was pregnant, I realized that I was falling into patterns of thinking I outwardly rejected, and that my entire framework for valuing myself was ableist in nature. Valuing my body for what it could do (hiking long distances! Carrying heavy things! Walking everywhere!) had felt like a huge empowering step. After all, I wasn’t valuing my body and myself for conforming to beauty ideals! But once all of those abilities that made me feel powerful were gone — temporarily gone but still gone because of a crippling pregnancy — I realized the flaw. If you only love yourself because you are physically capable of doing things you think are cool, what happens when you lose that ability?

I’m a queer woman married to another person with a uterus, so you might think that when we decided to have a kid, there would have been some debate over who was going to carry the pregnancy. In reality, there never was. I wanted to be pregnant. I had dreamed about being pregnant for years. To me, it looked like a glorious adventure that would change me forever, a beautiful and joyful experience of what my body was capable of, and ultimately a celebration of my strength. In essence, I thought I would love being pregnant.

“Well, good for you!” she said, “you won’t have any trouble losing the baby weight that way!”

Instead, I hated it. It was hell; sheer and utter hell. I had hypermesis gravidarum, which basically meant that I was puking my guts out continuously for 10 excruciating months. Officially there was nothing else wrong with me, and I wasn’t under any medical restrictions, but functionally, I was on bed rest because even walking down stairs to the kitchen would bring up the waves of nausea that were always just below the surface. Some days even leaning to the side to grab something off my bedside table was enough to make me hurl. I threw up almost every time I took a shower, and basically every time I brushed my teeth.

And through all of that, any time I did manage to dress myself (sometimes with help!) and leave the house, strangers kept complimenting me. You’re just glowing! It looks like pregnancy’s really agreeing with you! You’re how many months along? Well you certainly don’t look it! You’re so small! On one memorable occasion, standing outside the grocery store, completely exhausted from the short walk through the aisles, a woman asked how I was feeling. I told her the truth, I told her that I felt like hell, that I was the sickest I had ever been in my life and if I had had any inclination pregnancy would be that bad, I would not have done it. She smiled at me. “Well, good for you!” she said, “you won’t have any trouble losing the baby weight that way!”

Far from pregnancy being a celebration of my body creating and sustaining new life, it was a dark time filled with loathing because I, someone who used to walk three miles every day, could barely make it to the end of the block. I had nothing to fall back on to keep my confidence up through the darkest part of my pregnancy because I relied on the physical abilities of my body so heavy to inform how I felt about it.

That day I learned that people do not just dislike and fear fat people, and they don’t just assume that fat people are inherently unhealthy and bad, instead, it’s far worse than that. Some people, like the woman I met in the aisle that day, literally believe that being thin, or at least thinner, is better and more important than being healthy enough to function. She wasn’t the only person to say that type of thing to me, though she was the only person to put it so bluntly. Many, many, people hinted that I should consider myself lucky that I was so sick that I was barely gaining any weight at all. It was utterly exhausting to listen to people say things like that. It was like they were saying that my experience wasn’t worth anything, it was only what my body looked like that mattered.

Because of all this, I started to hate myself. I hated myself for having to ask for help, I hated myself for not being able to rise above it and just do whatever needed to be done. I felt weak, and powerless, and awful. Far from pregnancy being a celebration of my body creating and sustaining new life, it was a dark time filled with loathing because I, someone who used to walk three miles every day, could barely make it to the end of the block. I had nothing to fall back on to keep my confidence up through the darkest part of my pregnancy because I relied on the physical abilities of my body so heavy to inform how I felt about it. And being told that the one thing that I hated the most, the fact that I was so sick and that, because of that, I could barely put on a pound, was something excellent, was certainly not helping my self-esteem.

Before giving birth to my son, I'd believed that in giving birth I'd prove once and for all that I was physically capable, that even if I had been weak during my pregnancy I could still be a badass during labor and push my child into the world. Instead, after a week of labor, I finally agreed to a c-section, and spent the next couple of months in a hard and difficult recovery. In some ways, it was even more demoralizing, but in other ways, it was like finally waking up. I had to let go of that last little hope that I could cling to ableism in order to feel good about myself. So finally, I reluctantly let it go. I started loving my body not because of what it could do, but just because it was mine, and it needed me to take care of it.

In the end I realized that body positivity, much like feminism, needs to be intersectional. It wasn’t enough to simply reject fatphobia, I had to reject ableism too, and embrace my body not because of what it could do, but simply because it was mine. It took time, patience, and lots of introspection. I'd never hate someone else just for being sick and needing help, so why would I treat myself that way?

I hear so many women say that they love their bodies, even with their stretch marks and sometimes scars, because of the wonderful thing their bodies did in bringing their children into our world. It’s wonderful to hear women love themselves, and it's so important not to play into the body-shame game. For me, personally, I've learned that that love should not be conditional, and ability certainly shouldn’t be one of the conditions! Whether it’s fat or thin, sick or well, fertile or infertile, temporarily abled or disabled, I love my body because it’s the only one I have, and that makes it wonderful.

More Like This
How To Increase Your Sex Drive While Pregnant
New Report Shows 80% Of Pregnancy-Related Deaths Are Preventable
Are Boy Babies Usually Late? Signs Your Baby May Be Born Late
Here’s How To Combat Performance Anxiety When Trying To Conceive