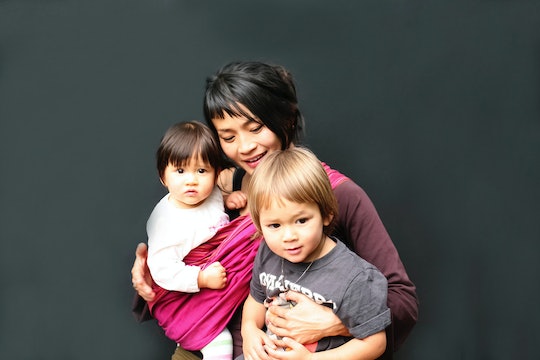 I can honestly say that if someone had asked me five years ago what type of parenting style I would adopt once I had children, it would most definitely not have been attachment parenting. Granted, I knew very little about what was involved, but I thought I had enough of an idea of what attachment parenting is really like to guess that I wouldn't fit the mold.

I remember running into a colleague I had lost touch with, finding out she shared a bed with her two young boys while her husband slept in another bed, and silently judging. I was absolutely mortified that any woman would choose sleeping with her children over her husband. Now? I would kick my husband out in a heartbeat if it meant getting an extra two feet of my bed width back, what with two kids sleeping between us in a queen bed. What the hell happened?

Well, they were born. And all the judgment I held in my kid-free heart instantly got ripped away and replaced by a stark awareness that I had never had a clue what kind of parenting choices I would end up making.

Call me a sucker, or soft-hearted, but there were certain things I just found myself instinctively doing. I couldn’t imagine putting my baby girl in a stroller, so far away from me, when I could wear her nestled next to my chest and have my hands free. Crying generally didn’t last very long, partly because she would work herself up to the point where she’d throw up from crying so hard, and she was at the bottom of the growth charts and couldn’t afford to throw up a bunch of breast milk. When we tried to transition her from bassinet to crib, she cried so much (again, to the point of throwing up) that somehow, she ended up sleeping between us on our bed. And while my original goal of breastfeeding for one year (at least) had seemed unattainable in the first six weeks of her life, the end result was almost two years of breastfeeding. I'll take it! And sure, maybe not all of that is because I ended up practicing attachment parenting, I know a lot of it was.

So,while I wouldn’t say I went into parenting with the goal of practicing attachment style, it happened anyway. And I can certainly say that it’s not how it looks in the pictures.