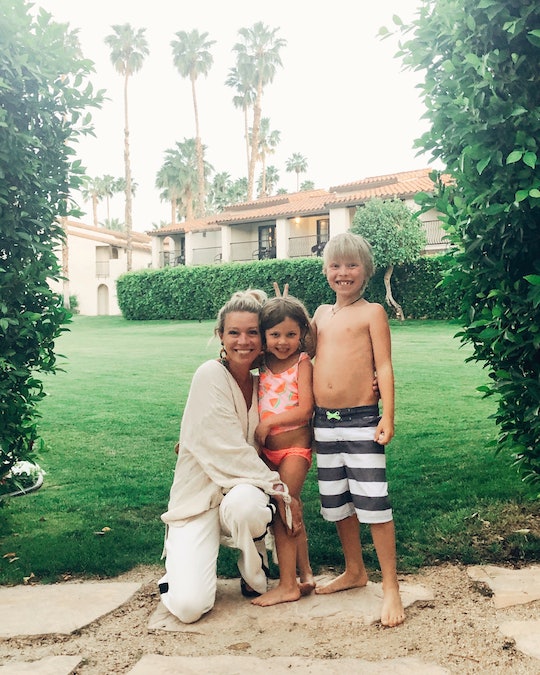 When I was a kid, mental health was not, shall we say, a robust topic of conversation. My parents subscribed wholeheartedly to the “get over it” school of thought, and as an adult, I rarely even took a Tylenol for a headache. I came to understand therapy and psychiatric medications as crutches; the lazy way out. They were for “other people,” meaning the really sick ones, or the ones who simply didn’t have the mental fortitude to deal with their own issues.

Me? I was tough. I didn’t need any help — with anything. So when I became a young adult and developed crippling and pathological anxiety and insomnia, I of course approached the problem in all the healthiest ways.

I’m totally kidding. I steamrollered right on over the question of mental health, because it seemed to me that if I simply kept moving fast enough, I might be able to outrun the noise in my head.

I imagined my children growing up with a shell of a mother, looking out at the world with glassy eyes that never quite saw them.

Then, a decade or so into my struggle, I became a parent: first to a boy, and then a girl. And suddenly my problem was no longer simply my own to bear. Just as pregnancy ended up being the motivation I needed to finally, finally seek out healthy, organic food for the first time in my life, it took becoming a mother to convince me that my anxiety wasn’t just a “personality quirk,” it was a problem, and one that affected my life in pervasive and damaging ways. Not only that, it was a problem that I could solve, if only I were willing to admit it existed, and then — hardest of all — admit that it wasn’t something I could handle all on my own.

I sought help, in the form of both therapy and medication. Finally. And the difference that it made — to my life, to my marriage, to my parenting — was nothing short of pure magic.

What had I been so afraid of for all those years? I suppose I was frightened that medication would leave me feeling “drugged,” that it would dull my emotions and turn me into something other than myself. I imagined my children growing up with a shell of a mother, looking out at the world with glassy eyes that never quite saw them. Dramatic, maybe, but that’s what I pictured. But what I experienced in the weeks after I asked for help was no dulling of the emotions at all. I’d describe it, rather, as a sharpening of reality, as the noise of “what-might-be” was gradually replaced by the solid steadiness of what was.

I have consciously raised my son and daughter to find their own ways to work through struggles, to the extent that they can. They come to me fighting (“SHE PUSHED ME”/“HE POKED ME!”), and my first reaction is always to ask them to try to sort it out on their own. They fall down, and I pause for a moment before going to them, so that they can decide for themselves whether they’re hurt, or simply surprised.

I’m not saying that the perspective that I grew up with was “bad,” not at all. To the contrary: it taught me how to do the hard work that goes into confronting problems, rather than skimming over the surface and seeking out miracles. The ability to do this is a quality that has served me well, and it’s one that I so hope my children share.

But I also hope that they learn from their mother’s mistakes, which is why the concept of mental health — mine, theirs, others’ — is one that we actively explore together. When my new book, The Big Activity Book for Anxious People, arrived in the mail, we sat down and paged through it together. They asked questions. They wanted to know what “anxiety” is, and I told them: It is a normal part of the human experience, but it can also become too big to hold inside.

I see now, and want my children to understand far earlier, that I spent years determined to fight a battle with my bare hands instead of looking around me for other tools that I not only “could” use, but were in fact necessary. There is a difference, you see, between a crutch and a tool; one shoulders the burden for you, perhaps keeping you from building up the strength to carry it yourself… and the other just makes you stronger.

Jordan Reid is the author of The Big Activity Book for Anxious People.

More Like This
I’m No Singer, But My Children Think I Am
Good Moms Have Abortions — I’m One Of Them
Adult Gymnastics Brought Me Back To Myself
These Stepmother's Day Instagram Captions Are Straight From The Heart