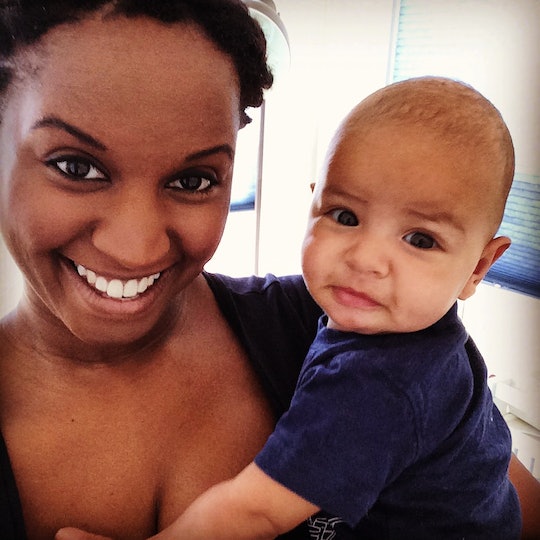 What I Want My Son To Know About Girls, Because Girls Matter

Right now my son is a toddler, but in many ways still very much a baby. He still speaks in single words and sounds, and still puts most things he finds in his mouth. He giggles at almost everything, and wails when things don’t go exactly how he wants. It's definitely too early for any of us to know what, if any, sexual orientation he has, but odds are he is straight. Even if he's not, he will live in a world that gives him considerable social power over his female friends and peers. I want him to be the kind of person who helps dismantle that kind of inequality as much as I want him to be his fullest, happiest self, because truthfully, those goals are linked. That’s why the most important thing I want my son to know about girls, is that girls are people.

That may sound like a simple and obvious statement, but it's not. Boys and men in our society are taught that girls are a lesser form of human than they are, even if that sentiment is never expressed in those specific terms. Every time someone apologizes to me for mistaking him for a girl, they are already suggesting to both of us that there is something wrong with being a girl. (They’re also suggesting that gender should matter at all for a baby or toddler, which doesn’t make much sense to me.) Every time someone shames a boy by suggesting he is doing something “like a girl,” or calls another man a “p*ssy,” or levels any of a laundry list of gendered insults at him, they are not only reinforcing a rigid, demoralizing set of standards for being regarded as a man; they are also teaching boys and men that girls and women are less than.

Boys and men in our society are taught that girls are a lesser form of human than they are, even if that sentiment is never expressed in those specific terms.

But girls are people. Whole, worthwhile people. All of the lessons my partner and I are trying to teach our son, from understanding boundaries and consent, to understanding his own male privilege, to being body positive, link back to this fundamental understanding that girls are people. They are not objects to use in any way. They do not exist for straight boys’ sexual gratification at their own expense. They don’t exist as the proving grounds for any boys, gay or straight, to demonstrate their (toxic) masculinity to their friends. They don’t exist to make boys’ lives easier by waiting on them, doing their work, or managing boys’ emotions by being anything less than their fullest, most honest selves. Girls are people who exist for their own reasons, and they are the only ones who get to decide what those reasons are.

While scanning Pinterest or occasionally reading Twitter and Facebook, I sometimes see lists of things “every mom should teach her son.” A lot of them revolve around teaching our boys to be “chivalrous” so they can protect and eventually partner with a “good” girl or woman. I don’t want my son going around trying to mentally sort girls and women into “good” and “bad” piles, because that gets dangerously close to letting him believe that it’s OK to mistreat anyone who falls in the “bad” group. (As a feminist, I know all too well how easy it is for girls, especially girls of color, to end up being labeled as “bad.”)

Furthermore, it’s not his, or my, job to decide who is and isn’t a good person; it’s our job to be decent to others, and to protect ourselves by holding all people accountable for their behavior, good and bad. I want to raise my son to help anyone who needs help, not just a certain subset of girls and women society deems “respectable” enough. I want him to treat all people, girls included, with a certain baseline of respect no matter what he thinks of how they look, or who they associate with, or how they choose to spend their time. Because girls are people, and we should always treat people based on how they treat us and others.

I want my son to understand that girls aren’t either “good” or “bad,” but that they’re as complex as any other human beings. I want him to know he’s allowed to be as complex as they are. My dearest son, you don't have to spend your whole life pretending you're either indifferent or angry. There is more to being a human than that. Girls can be wonderful at times, and terrible at times, just like anyone else. They have their own thoughts and feelings and goals, and it’s not their job to simplify, change, shrink, or hide themselves to make boys’ lives easier. They don’t have to smile if they don’t feel like it, or look pretty because that’s what other people around them feel like seeing. They deserve to get to make their own choices, and even to make mistakes without being judged as irredeemable or unworthy for doing so. They deserve to get to experience their lives and present themselves on their own terms. I want him to understand that, and be able to reality-check his friends and peers if they don’t.

Girls are as unique as any other people. They don't all have the same interests, preferences, or desires. There is no one surefire “trick” to "get girls." There is no specific thing my son, or anyone else, can do (well, aside from not being a sexist jerk) that will guarantee most or all girls will want to be their friend or partner or anything in between. I want him to know that anyone who says otherwise, is lying, and revealing that they not only hold a very low opinion of girls, but also of the boys and men they're targeting with this vapid message. Again, girls are people, and there aren't quick and easy formulas for forming quality relationships with other people because, yes, people are complicated and unique.

I want my son to understand that girls aren’t either “good” or “bad,” but that they’re as complex as any other human beings.

It's especially important to me that he already understand all of these things by the time he becomes old enough to date and form romantic relationships. There are people in the world who believe that relationships, especially romantic ones with girls and women, are about dominance and "winning," about keeping their partners off balance so they can feel in control. That means he is going to encounter people who try to teach him how to play the kinds of games that allow him to “succeed” in those relationships. I want him to run, not walk, in the opposite direction when he inevitably meets those people, because those people are trying to set him up to be an abuser in a string of hollow, unsatisfying relationships.

Girls and women are people. There are no special tricks necessary to “get” and “keep” a girl, as though she is some kind of wild game to be hunted or a pet to be tamed. All he needs to know to form the kinds of fulfilling relationships he deserves with anyone, male or female, is how to be his sweet, genuine, considerate self.