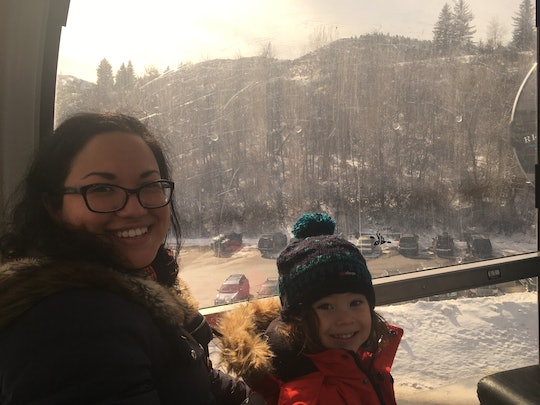 There’s something about pregnancy and motherhood that prompts people to ask all the questions. They’ll ask you if you’re having a boy or a girl, how you'll give birth, or if you're going back to work. They ask about circumcision and ear-piercing and sleep training and how you're feeding your kid. And, for better or worse, you kind of get used to it. In fact, you turn into a bit of a wiseass about it all. But there’s one question I can never be a wiseass about: When am I going to have another baby?

This is always a loaded question for me, and one I generally try to avoid as much as possible. Sometimes I simply tell people, “I don’t know yet,” or, “My son is still pretty young,” because it usually seems to shut inquiring minds up pretty quick. Some folks tell me they think I should try for another child as soon as possible, promising me that my son is going to want a sibling. I’ve even been called inconsiderate for not wanting to give my son a brother or a sister right away. Others are a tad more "understanding," and insure me that I have some more time to think about it. “You have time, but don’t wait too long,” is a pretty common response, to be honest. In other words, everyone has an opinion, and those opinions are usually shared as soon as I answer the question: “How many kids do you have?”

But there's the thing: my body hates pregnancy. It's not as simple as "I want to be pregnant so I will be." I lost my first baby to prematurity. She lived for around eight hours, then passed. Her name was Margaret, and while she wasn’t here long, she was (and remains forever in my heart) my daughter. But it’s not exactly the kind of detail I am open about sharing whenever I meet someone, especially if I just met them and especially if they're asking me about my children.

Every time I’ve been pregnant, I deal with extreme mood swings and a dark depression.

With my second pregnancy, I had to deal with a number issues. Because we never found out why my daughter was born preterm, my doctors decided to handle my pregnancy carefully. That meant weekly ultrasounds, weekly progesterone shots, pelvic rest, and, eventually, a cerclage and bed rest. For 40 weeks my body was basically held captive to whatever my doctors wanted in the best interest of my baby-to-be. I was fine with it, but it’s not something I want to jump into again. If ever.

Then there’s all the mental health issues that come along with pregnancy. I’ve always had anxiety issues, but ever since losing my daughter and then nearly losing my son, I’ve dealt with varying degrees of pregnancy-and-birth-related post traumatic stress disorder (PTSD). This means I deal with occasional flashbacks, hyper-vigilance, intrusive thoughts (like frequently imagining my son being hurt, lost, or killed), and a slew of other symptoms. It’s hard for me to de-stress, hard for me to relax, and hard for me to put my past completely behind me. Add pregnancy hormones to the mix, and suddenly I’m facing some severe depression. Every time I’ve been pregnant, I deal with extreme mood swings and a dark depression. It’s not to say that this will happen with every pregnancy in the future, but should I ever decide to start trying again I would much prefer to have a plan in place to make sure the chances of another difficult pregnancy are minimal. I want to continue making progress with my current therapist, and be in a better position while also having that support system, rather than going into another pregnancy acting as though prenatal depression and anxiety aren’t likely to be factors. Because they are.

When we lost our daughter, my husband lost his job when he wasn’t given more than a week to grieve and, as a result, expected to come to work with a smile on his face.

Then, of course, there are all the outside factors to consider before deciding on having another child. When I was pregnant with my first two babies, I was on Medicaid and the Supplemental Nutrition Assistance Program (SNAP). After I had my son, I was also on Women, Infants, Children (WIC). I was employed on and off, but not making anywhere near the amount of money I'm making now. And while I’m doing better financially, and no longer receiving government aid, I know that could easily change. My family has struggled on and off for years, and we’re only now beginning to climb out of the financial hole we've been able to endure. When we lost our daughter, my husband lost his job when he wasn’t given more than a week to grieve and, as a result, expected to come to work with a smile on his face. This led to us losing our apartment and having to move in with my family for some time. Grief has a tendency to snowball into other problems as well.

All the aforementioned reasons for delaying having another child are valid, but do I even really need to say them? Do I need to "justify" this choice with people? I mean, maybe I just want to focus on becoming a more successful writer before considering the possibility of having another baby. Maybe I want to focus on being a better mom to the son I already have. Maybe I want to be able to put more time into things that make me feel fulfilled and happy. Just like it's OK if a mom feels capable and ready to take on the responsibility of caring for more than one child, of dividing her time in such a way, it’s also OK if a mom prefers to focus on only a small handful of things at a time. I know that having another baby right now would render me unable to keep working at the pace that I am, and keep me from traveling as often as I do. There’s nothing wrong with wanting to put yourself first, whether you’ve had the traumas I’ve had or not.

While I completely understand that curiosity is only human, as a society we need to start realizing that just because we want to know doesn’t mean we need to ask.

So in the end, it's really only two things I wish I could tell someone who inquires about my reproductive plans. One, I wish I could say it's none of their damn business (because, seriously, it’s not). While I completely understand that curiosity is only human, as a society we need to start realizing that just because we want to know doesn’t mean we need to ask. And just because we’re curious doesn’t mean we’re entitled to an answer, especially if someone isn’t being forthcoming to begin with. Family planning is a personal matter. I’m not saying we can never ask any questions about whether or not someone wants to have a baby, or more babies, but rather that we need to be more mindful of the way and moment when we ask. We should think about whether we really need to know this information the first place, and to be prepared not to. We also need to check our judgements at the door, and if we’re incapable of doing so, perhaps we need to ask someone about their favorite TV show instead.

The other thing I wish I could say when folks ask me if I’ll have another baby though is, honestly, the very long version of it. Literally everything I just described. Every painful detail, past trauma, and current reality that has brought me to this current decision. There’s not always time to have a lengthy, and oftentimes emotional, discussion about the reasons why I may or may not want to have another child, though. I don't always have the energy to invest that much emotional labor into a person who, for all intents and purposes, is being nosey.

So the next time you ask a personal question, be prepared to listen to the answer.

More Like This
Experts Explain Whether It’s Safe For Your Baby To Sleep On Your Chest
Zaya Wade Is Rocking New Long Hair & As Gabrielle Union Put It, She's A "Vision"
Introducing My Boyfriend To My Kid
I’m Getting Dual Citizenship For My Jewish Children, Just In Case.