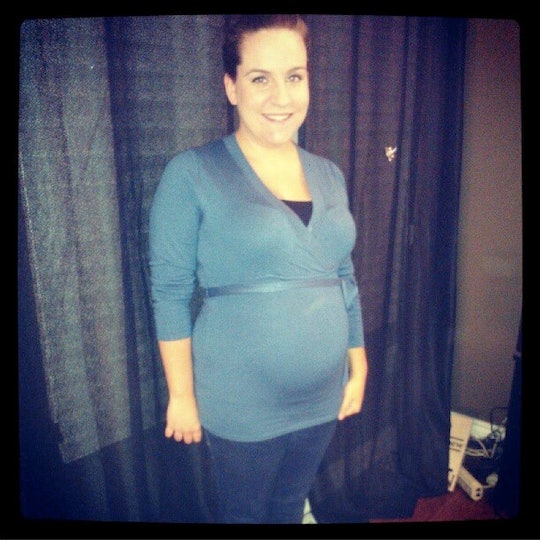 What I Wish I Knew I'd Miss Most About Being Pregnant

Before I got pregnant, I was certain I was going to love it. I was really looking forward to being a mom, and I couldn’t think of anything more amazing than a child growing inside of my own body. I was looking forward to feeling kicks and seeing a little baby’s face on an ultrasound, my belly getting rounder all the while. I just knew I was going be an awesome pregnant person. But then I actually got pregnant, and I hated every single minute of it. I wish someone had stopped me then and told me what I'd miss most about pregnancy once the babies came.

I had an awful pregnancy. It was hard, uncomfortable, medically complicated, and far too short. I didn’t enjoy it at all, and it felt entirely foreign to me. But once Madeleine and Reid were born, once they were on the outside of my body, exposed to the world, all I wanted was to be able to keep them inside of me where they could be safe. And seeing their beautiful faces, falling in love with them as quickly as I did the moment I laid eyes on them in their incubators the day they were born, I just wanted to have them back in my belly, where I could feel them move and kick. I wanted to be able to savor the experience of being together, just the three of us, the way we would never ever be again. I wish someone had told me that pregnancy would be over far faster than I was ready for it to be, especially for me. I wish someone had told me savor that time period because for me, it'd mark the first and last time I was pregnant.

I had a feeling things were getting off on the wrong foot when instead of feeling excited after I saw those two pink lines, I just felt terrified. My husband was away on business at the time and wouldn’t be home for another week, so I was all alone, holding a positive pregnancy test in my bathroom while my dog looked up at me intently, tail wagging. “What do I do?” I asked her, wishing in that moment that I’d waited until Matt had returned home to pee on the damn stick. This was not how this was supposed to go.

A couple of weeks later, I was thrown another major curveball: at my first, super-early dating ultrasound (that, again, I was alone for, because I am obviously an idiot), I learned that not only was I pregnant, but I was expecting twins. “Yep, clear as day,” the tech said, pointing out two little blobs on the screen. “There are definitely two babies in there.”

Pretty soon after, I learned the hard way that carrying twins was not going to be a walk in the park for me. I’d previously imagined that I’d just breeze through the whole 10 months, that I’d just eat healthy and stay active, and that I'd soak up every glorious minute of having my babies on the inside. But before I’d even reached the 12-week mark, I was miserable, with awful cramping and terrible nausea, and intense, zombie-like exhaustion that was unlike anything I’d felt before.

Instead of revelling in my new mom-to-be status, I found myself sleeping until noon to bypass the worst of the morning sickness, then getting up and moving to the couch for the rest of the day, getting up only to pee and/or puke (both of which I did often). My healthy eating plan went out the window once I realized the only thing I actually wanted to eat was Taco Bell (yes, really), and my goal to “stay active” was redefined as “maybe take the dog for a walk around the block if you can handle being upright for that long.”

I was totally bummed by my own misery, because I had not been expecting it at all. But what was even more surprising to me was how difficult pregnancy turned out to be mentally. I hadn’t even considered the possibility of having twins before I got pregnant, and the prospect of raising two children at once seemed so overwhelming. And while I just assumed I’d somehow feel a magical bond to my two, tiny fetuses, I instead felt absolutely nothing — no connection whatsoever. Our decision to get pregnant was so deliberate, and yet, once it happened, it felt like a totally abstract concept that I couldn’t wrap my head around.

One day, I sat on my therapist’s couch, and admitted how I felt.

“I just think that maybe I’m not going to be someone who likes being pregnant,” I told her. “Maybe I’ll just have to suck it up until I give birth and then I’ll put it behind me and move on and be a mom.”

But I didn’t realize then just how bad it was going to get, or how little time I’d actually have left with two babies inside of me. At my next ultrasound at 21 weeks — the exciting one where we planned on finding out the babies’ sex — we learned that my cervix was already dilating. I’d need to have my cervix surgically stitched closed by my OB-GYN that day or else I’d almost certainly go into labor soon and the babies would almost certainly die.

The stitch bought us some time, but it meant I’d be spending that time on bed rest, first at home, and eventually in the hospital, unable to get out of bed for any reason whatsoever. Then, at 25 weeks and five days along, my water broke, and I gave birth to a little boy and a little girl, both weighing less than 2 pounds each.

The next almost-four months were spent in the NICU, and it was terrifying and sad. Somehow, both babies made it through, and came home relatively healthy and happy and gorgeous, but I felt shellshocked, still unable to understand what had happened. There was so much I was heartbroken about, so many things I hadn’t expected, so many things I wish had gone differently. But the one thing that really surprised me was how desperately I wished that I could go back and be pregnant again.