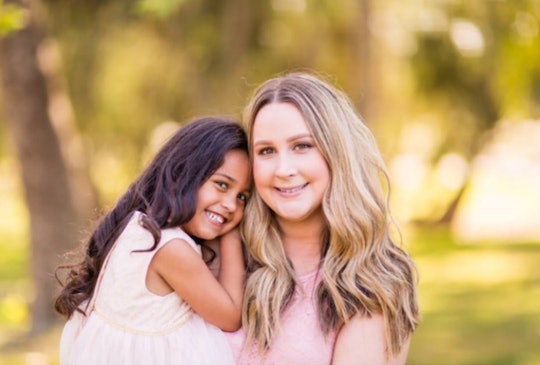 What I'm Thinking When You Ask Me, "Is She Yours?"

My daughter has the most beautiful tan skin. She gets it from my husband, who is Hispanic and Native American. She has long, wavy dark brown hair that has a hint of auburn in the sunlight. Her big brown eyes are always filled with excitement.

I am Caucasian and light-skinned. When I was pregnant, I thought my baby would have a mixture of my husband's skin tone and mine, but my daughter came out tan and with a full head of dark hair. It was obvious to those who knew us that my daughter inherited my husband’s dark features.

It never really dawned on me that people would notice our difference in skin color until my daughter was a toddler and I took her outside more often. I quickly learned that some people do not take the saying “think before you speak” to heart. People constantly ask if my daughter is really "mine," and I am so sick of it.

Once, I was with my daughter at a store buying items at the checkout lane when the cashier kept looking at us. I could tell from the perplexed look on her face that she wasn’t admiring us as a cute mommy/daughter duo.

The woman asked, “Is she yours?” It was an odd question. Of course she was mine. “Yes,” I replied as I gently brushed back my daughter’s hair. The woman smiled and continued to ring up my items. I smiled to be polite, but I was angry, especially because my daughter later asked me why the woman had said that. I didn’t have a reasonable explanation for her. I told her the lady was just wondering and we went on our way.

No, I am not her nanny. No, she is not my friend’s child. She is most definitely mine.

Since then, I’ve been asked many times if my daughter is mine. Whenever I take her to the park, I get odd looks from people and I can tell what they’re thinking. No, I am not her nanny. No, she is not my friend’s child. She is most definitely mine.

I understand people assume things. I think there is an older generation that was brought up believing that if a woman and child don't look alike, they probably are not related. But times have changed and multi-racial families are becoming the norm. What people don’t realize is that the questions, comments and looks affect my daughter and the way she feels about her own skin color.

I know I’m not the only mom who is going through this. I know many moms who don't look like their children for any number of reasons, who also get looks and comments from strangers. I know that women of color who have light-skinned children probably struggle with this worse than I do. And I'm sure they, too, are deeply worried that their children will hear these remarks.

Every time someone makes a comment about my daughter's skin color, I pray she doesn't notice. But deep down, I know she does. I know this when she randomly mentions how we look different, or when she says she doesn’t like that she is not light like me. At 5 years old, her skin color should be the least of her concerns.

The older she gets, the more she realizes she doesn’t look like her mommy. One day, she told me she didn’t like “being brown.” It broke my heart.

Now that my daughter is getting older and starting kindergarten soon, I’m starting to realize that the older she gets, the more she realizes she doesn’t look like her mommy. She mentions her skin color more frequently now. One day, she told me she didn’t like “being brown.” It broke my heart. “Did someone say something to you at school, sweetie?" I asked. “No,” my daughter replied. I could tell she didn’t want to talk about it, but I knew that it bothered her.

I tried to explain to my daughter that people come in all different shapes, size and colors. I tried to tell her that her skin color was beautiful, and it didn't make her any different than anyone else. But she continues to point out to me that she looks different than me.

I tell my daughter all the time that she’s beautiful the way she is. But I know that she will continue to pick up things people say about her and her skin color. All I can do is teach her to love herself and hope that she will not be judged by others as she gets older. I hope that we'll one day live in a world that's more accepting of different types of families, so we can walk down the street and no one will ever wonder if she is my child again.