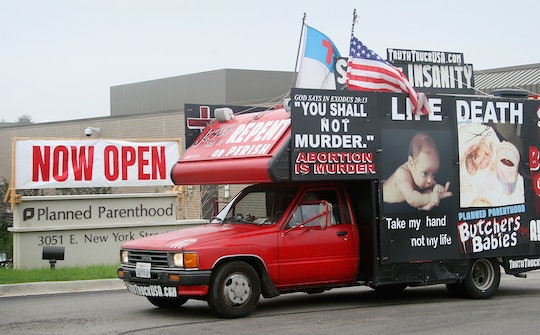 What Is A Crisis Pregnancy Center?

Even though Roe v. Wade has made abortion legal for the last 44 years in the United States, anti-choice laws have sought to severely limit women's access to abortion care. And even when there aren't specific state laws on the books trying to keep women from getting the abortion care they need, anti-choice proponents have devised perfectly legal ways to influence a woman's choice about an unplanned pregnancy. Enter: Crisis pregnancy centers. What is a crisis pregnancy center? The name is intentionally misleading, and the fact that one has just opened up across from Mississippi's last remaining abortion clinic is a problem.

Mississippi almost became the first state to have no abortion clinics — that mantel falls onto Kentucky's last abortion clinic now under threat. A day after the monumental SCOTUS decision in Whole Women's Health in 2016, the Supreme Court blocked a state law that would have shuttered Mississippi's last abortion clinic, Jackson Women’s Health Organization in the state’s capital city. Now, directly across the street, a women’s crisis pregnancy center has set up shop — the Center for Pregnancy Choices — posing a direct threat to Mississippi’s last bastion of abortion care. That’s because crisis pregnancy centers advertise themselves as “non-profit medical clinics,” but are actually counseling centers with anti-choice agendas. The Center for Pregnancy Choices did not immediately respond to Romper’s request for comment.

CPCs are often found in close proximity to abortion clinics. In Mississippi, there are 38 CPCs, according to HuffPost. The latest one has opened its doors across the street from Jackson Women’s Health Organization. As noted by New York Magazine’s The Cut, abortion clinics near CPCs are three times more likely to experience “high levels of violence, threats, and harassment” as revealed in a 2016 study by the Feminist Majority Movement.

Another alarming trend found at these centers: CPCs have reason (through law, regulation, or otherwise) to provide medically accurate information as they counsel these women. In several documented cases, women have been given dangerously inaccurate medical advice and outright false information at crisis pregnancy centers. And if a woman really doesn’t want to be persuaded into keep her pregnancy, CPC staff — some without any medical experience — have been known to resort to manipulative bullying, as one HuffPost writer described her experience going undercover at crisis pregnancy centers in Virginia:

The way that these women treated me made one thing very clear: they didn’t care about me, my future, my happiness, or my relationships. I was simply a shell that needed to be distracted and kept questioning until it was too late for me to make my own choices, and too late for me to decide if this is what I wanted — or not. I truly can’t imagine the pain that CPCs inflict on women who are actually struggling with an unintended pregnancy. I left each CPC feeling humiliated, terrified, and panicked... and I wasn’t even pregnant.

In 2013, Jeanneane Maxon, vice president for external affairs at the anti-choice group Americans United for Life, spoke to The New York Times, calling crisis pregnancy centers “the darlings of the pro-life movement.” While some would argue that having a crisis pregnancy center across the street from an abortion clinic is a fine example of reproductive choice at work, it’s important to understand that CPCs have no interest in promoting a woman’s choice in her own reproductive freedom at all.