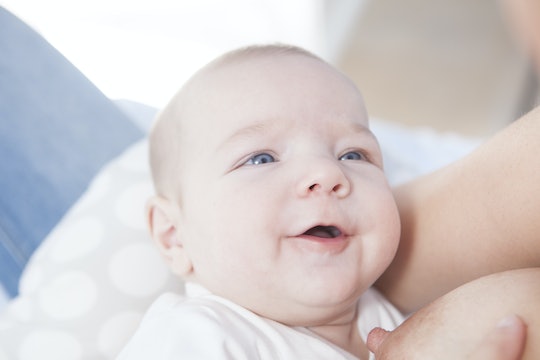 What Is A Nursing Strike? There's No Picket Line Involved

Babies are known for doing exactly what they want to do, even if it goes against everything you're doing to, you know, keep them alive. They don't want to go in car seats, they don't want to nap, and sometimes, they don't even want to breastfeed. But what is a nursing strike? Does it mean your baby is trying to wean or are they just protesting for the day?

Although it's kind of fun to imagine your tiny baby holding up their own picket sign when they refuse to nurse, it can be incredibly frustrating. Baby Center defined a nursing strike as when a baby refuses to nurse, but they aren't currently being weaned. It can come out of nowhere; your baby could have been nursing just fine a few hours before they began to refuse. And although some may argue that all you have to do is wait it out and your baby will come to you when you're hungry, that's not always a good plan. According to Kelly Mom, a baby who isn't nursing shouldn't be ignored. They aren't stubborn or fighting against the breast — a nursing strike usually implies that there's a reason why your baby doesn't want to nurse. Whether they prefer a bottle or have a hard time latching, a baby on a nursing strike usually has a reason why they aren't nursing and it's up to you to figure it out so they can get back to the breast.

La Leche League International noted that a nursing strike could be caused by something as simple as a change in your deodorant or perfume that now makes you smell "different" to baby. If your little one has been sick and it's painful to nurse, like if they're battling an ear infection, if you've been under a lot of stress, if your baby's gums hurt, or even if you yelled out when they accidentally bit you and scared them can all be reasons your baby is on a nursing strike.

The good news is, it's usually temporary. Baby Center noted that a nursing strike can last between two to five days, but it could go on for longer. You'll have to be sure to maintain your milk supply while your baby is fighting nursing, so be sure to pump and continue to give your baby breast milk, whether it's through a bottle, syringe, or cup, so that your supply stays up and your baby gets the nutrients they need.

Kelly Mom suggested that skin to skin contact can help end a nursing strike as well as nipple shields and baby carriers, but you should be careful not to pressure your baby to nurse. Offer your breast often, but don't freak out if they still shake their head no. Let your baby take control — have some skin to skin and let them know that breastfeeding is right there and available if they want it.

If you're still having issues, reach out to a lactation consultant to see what's causing your baby's nursing strike and how you can fix the situation. What to Expect noted that a nursing strike is rarely caused by your child's readiness to wean, so be patient and find a support system to get your baby back on the breast.