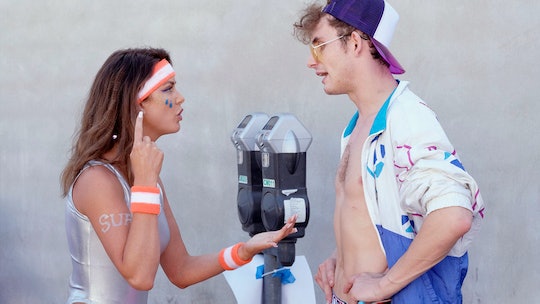 'Vanderpump Rules' Is Throwing A Puppy Shower & It Looks *Too* Cute

You're invited to the event of a lifetime. Vanderpump Rules stars James Kennedy and Raquel Leviss are throwing a puppy shower for their dog, Graham, on the Apr. 8 episode entitled "End of an Era", and you certainly don't want to miss it. While you've probably heard of a baby shower, what is a puppy shower?Vanderpump Rules fans are curious about what James and Raquel are planning for their adorable pup.

Like a baby shower, a puppy shower is a puppy party that is thrown to welcome a new member to the family. However, unlike a baby shower, the guest of honor is a dog and the party is typically organized to cater to, well, dogs — from the treats down to the guests. Per Dog Time, a puppy shower also is a great way to start socializing your pup to both humans and canines alike. And although some people may roll their eyes at the thought of a puppy party, a new child — of any kind — is cause for a celebration. After all, the status of dogs within the family is evolving. According to Psychology Today, dogs have become more "important as family members, particularly as children" to Americans.

Regardless, James and Raquel's puppy party on Vanderpump Rules looks like it will be everything fans expect it to be — with just a little bit of drama on the side.

In the preview for Vanderpump Rules Season 7 Episode 18 gave fans a taste of the extravagant party that James and Raquel are throwing for their pup. In a preview, the couple brought Graham to the salon to get a wash and trim in preparation for his party debut.

The couple then went taste testing for supplies. "We have to get all the catering sorted, the decorations, and the hors d'oeuvres. We even get to test the puppy hors d'oeuvres." James explained, as the preview jumped to him spitting out a dog treat.

But, since this is Pump Rules and not a puppy party planning series on The Food Network, it didn't take long before drama settled in.

Raquel began discussing the guest list with James and Billie Lee. Raquel stated that they would invite a few familiar faces from SUR, like Jax Taylor and Brittany Cartwright. She also mentioned that she would invite Stassi Schroeder. Her reasoning? Stassi hasn't verbally attacked her "unlike some other people." Yikes.

The trio then reminisce a few past altercations with Lala Kent. So it's probably safe to say that Lala won't be invited to the puppy party.

Despite the drama and future altercations that will eventually ensue on Bravo's Vanderpump Rules, I hope that James and Raquel's Mini Goldendoodle has the time of his life during the party.

James is also hopeful that Graham's party will bring the cast together. "Hopefully, everyone will come and we can rekindle some old friendships," James said during the preview. "If there's one thing I know that this entire group could agree on, it's our love for puppies."