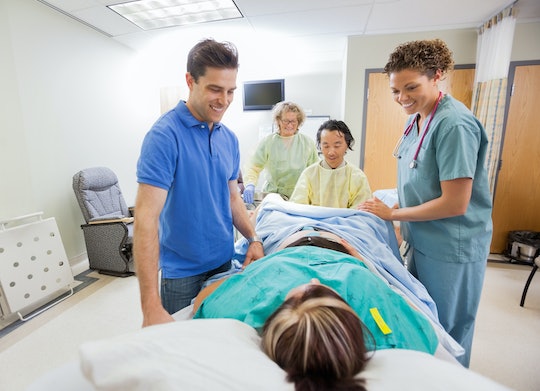 What Is A Second Degree Episiotomy? You Probably Won't Need One

Pushing a baby out of your vagina is no easy feat; I think the entire world can agree on that. But delivering a baby is often made more difficult by vaginal tears or an episiotomy, especially if you're reaching one that's considered a second degree. A tear is fairly easy to understand, but what is a second degree episiotomy?

According to the American Pregnancy Association, an episiotomy is a surgical incision that helps to enlarge the vaginal opening so your baby can make it out safely. They used to be a lot more common in births, but the American Congress of Obstetricians and Gynecologists stopped recommending an episiotomy during delivery in 2006. According to the ACOG website, only 12 percent of vaginal births involved episiotomy in 2012. That's a pretty big decrease considering in 2000, 33 percent of vaginal births involved episiotomy.

But, an episiotomy is recommended in some cases noted Mayo Clinic. Situations where the the baby needs to be delivered quickly, the baby can't make it through the vaginal canal, an abnormal baby position, or if vaginal tearing looks imminent and severe are all instances that may warrant an episiotomy.

But what constitutes it being second degree? According to Healthline, a second degree episiotomy is the most common type of incision. It extends through the vaginal lining, but also extends into the vaginal tissue. What to Expect noted that this is the same description of a second degree tear, which is also very common.

But if the thought of an episiotomy, second degree or not, isn't part of your birth plan, be sure to speak up. Parenting noted that there are ways to avoid an episiotomy, like speaking to your doctor and performing perineal massages to help the skin stretch.