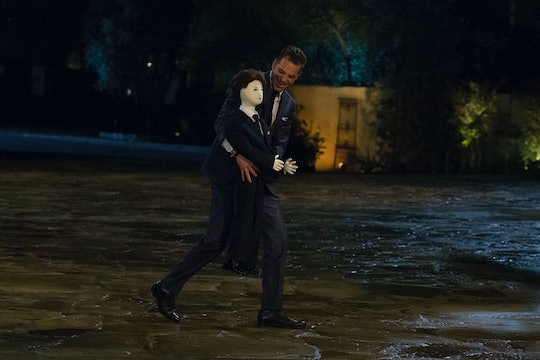 What Are Adam & AJ Up To After 'The Bachelorette'?

As this season of The Bachelorette gets down to the wire, I think it's a pretty universal feeling that AJ the doll (or Adam Jr. to the real fans) might actually be more memorable than his owner/father. I definitely expected more from Adam when he showed up in the first episode with AJ in tow, but that's really all he's done to stand out since. Rachel, who is maybe still recovering from her interaction with the inexplicably French-speaking doll, has kept Adam around this long, so it begs the question of what is Adam doing now after The Bachelorette? If your answer is "probably something involving Adam Jr.," you are not far off.

Like an off-duty ventriloquist artist, Adam quickly faded into the background without AJ by his side. Considering he's among bigger personalities and fan favorites like Peter or Dean, it may not be all that surprising to learn fans have created the #WhoIsAdam hashtag to commiserate with other confused members of Bachelor Nation who are still trying to figure out how, this close to the end of the season, it could still be possible that guys like Adam (who have had very limited interaction with Rachel) are still getting roses. While there are legitimate contenders leaving fans trying to decide who they think Rachel will ultimately choose, I'm sorry to announce Adam will probably not be one of them. But hey, he seems to be in good spirits!

Of course, one doesn't have to go very far into Adam's Instagram to see a picture of Adam Jr. Can you really blame the guy, though? If I went on a reality show and was only known for one thing, I would milk it until I couldn't possibly do so anymore.

Other than hanging out with his main man AJ and some of his fellow Bachelorette contestants, this lawyer's Instagram proves that he has been keeping himself busy in the aftermath of the show. He golfs. He's done a few photo shoots. He flies in planes to "scout properties," whatever that means. I, for one, am glad he has hobbies and isn't actually a weird guy who spends all of his time with a doll.

Whether or not I am completely wrong and Adam actually does end up being the one for Rachel, one thing is for certain: Adam Jr. was undoubtedly the true star of this season of The Bachelorette. And for that, I'm grateful.