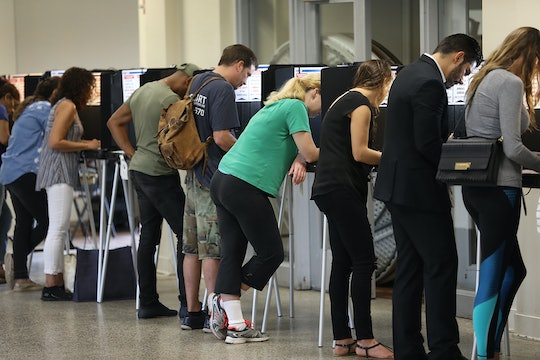 The midterm elections are over, and people are spending a little time coming to terms with the shape of things. The victories, the disappointments, the changing of the guard, as it were. While it's possible not everyone is happy with every result, voters in one state just did something pretty amazing. A little something called Amendment 4 was passed in Florida. And if you've never heard of this and might be wondering what Amendment 4 is, be prepared to be suitably impressed with the entire state of Florida. Because it's a pretty big deal.

As of Tuesday night, the majority of voters in Florida who have been convicted of a felony and served their sentence will now be allowed to vote, according to Vox. This means that people who have served out their sentence for a conviction, whether they did so by probation, incarceration, or restitution, will be allowed to vote in the next election, as explained by ABC News. Felons in the state of Florida excluded from this restored access to voting are those who were convicted of sexual offenses or murder, according to ABC News.

This is a pretty huge deal for the state of Florida, especially considering the fact that Amendment 4 needed a super majority of 60 percent approval from voters to pass, according to Florida Today, and it was passed with 64 percent of the vote. This seems to indicate that most voters across the state figured it was finally time to allow people who had served their sentence to have their voices heard.

So how many people does Amendment 4 potentially affect? Probably more than you think. A 2016 Sentencing Project estimate shared by Vox found that approximately 1.5 million people in the state of Florida were unable to vote because they had previously been convicted of felonies, which amounts to just under 10 percent of voters in the state.

This is particularly good news for one specific demographic in Florida, as NPR reported; until Amendment 4 was passed a full 20 percent of eligible African American voters were not able to cast their ballot unless they put forth a formal appeal to the Governor of Florida's office. In February, according to WAMU, a federal judge found this process to be unconstitutional, saying in his ruling:

In Florida, elected, partisan officials have extraordinary authority to grant or withhold the right to vote from hundreds of thousands of people without any constraints, guidelines, or standards. Its members alone must be satisfied that these citizens deserve restoration. ... The question now is whether such a system passes constitutional muster. It does not.

On a personal level, Amendment 4 finally acknowledges that voters should not be defined by one element of their life, nor punished indefinitely. As Yraida Guanipa, a former felon who served 11 years for drug trafficking in Florida before going on to earn her Master's degree and start her own business, told NPR about being blocked from voting, "It's not only punishing me, but it punishes my family and my community because it's blocking us [from having] a voice."

Now 1.5 million voices who had been silenced will have a chance to be heard, thanks to Amendment 4. It's about time.