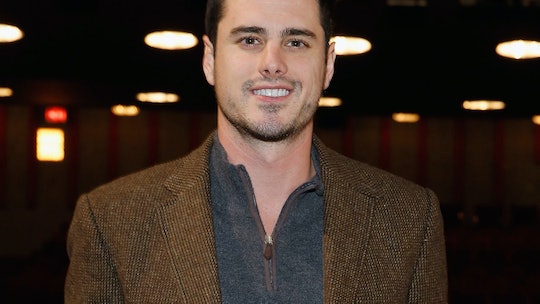 You better watch out, Chris Harrison. Ben Higgins is after your crown. During The Bachelorette's Men Tell All special on Jul. 22, ABC announced The Bachelor Live on Stage, which will be hosted by the Bachelor Nation fan-favorite. And while everyone seems ready to dive in, most fans were left a little confused about the franchise's latest concept. So, what is Bachelor Live on Stage? Ben Higgins is going on tour, and he's probably coming to a city near you.

In a moment that felt like the famous Devil Wears Prada scene where Miranda promoted her Runway replacement to eliminate her competition, Chris revealed Ben would be sharing The Bachelor experience with audiences across America.

"I have some exciting news for you, Bachelor Nation. We’re about to launch an exciting new way to experience The Bachelor," Harrison said, per People. "It’s called Bachelor Live on Stage, hosted by Ben Higgins. And it’s coming to a city near you. If you’ve ever wondered what it’s like to be on The Bachelor, then, this is your chance.”

But what exactly does this mean? According to the website, The Bachelor Live on Stage Official Tour will come to over 60 locations across the U.S. in 2020 and essentially live out a season of The Bachelor on stage, fitting in "all the drama, the gossip, and the romance of your favorite TV show in one delightful evening for the ultimate fan party."

The website then goes deeper into what fans can expect from the traveling live show. The statement reads:

Previous Bachelor and Bachelorette favorites will serve as your hosts, as one eligible hometown Bachelor is introduced to local ladies from the audience for a chance at love. For the first time ever, Bachelor Nation will have a say in the rose ceremony. From the first impression rose to group date challenges and coveted one-on-ones, watch it all unfold live on stage. Audience members and hosts will guide the Bachelor in his journey to find love. If the leading lady accepts the final rose, the night could end with the start of a beautiful romance.

Now, if you want to join the fun or maybe even fall in love, you can buy tickets to Bachelor Live on Stage starting on Jul. 26 and join the mailing list to receive updates. You can also apply to be part of the show, but it looks like the application isn't up just yet.

As a fan who just can't seem to quit The Bachelor franchise, I am curious to see how this live show goes. Given its one-night-only format and no chances for producers to edit a streamlined story, it might be a little too much improv for my taste. But at least the show's host seems to be hyped about all the possibilities. In a press release, Ben shared his excitement over The Bachelor Live on Stage Tour.

"I am so pumped to host the Bachelor live tour," Ben said, per Entertainment Tonight. He then gushed about his passion for Bachelor Nation and added, "I am ecstatic to be able come to your cities with an amazing team of people from Warner Bros. to visit you and show you all a taste of what it is like to be on The Bachelor! We are coming to your cities, meeting you in person, and hopefully spreading some love along the way! See you soon Bachelor Nation!"