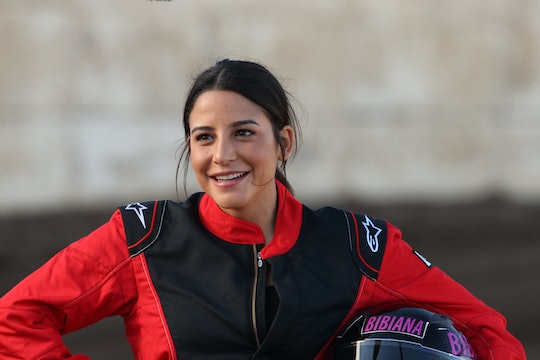 What Is Bibiana Up To After 'The Bachelor'?

Bibiana instantly became everyone's favorite Bachelor contestant after she called out Krystal for taking what, in her opinion, was way too much time with Ari. But does Arie love her as much as fans do? The only way to find out is to obsessively check her social media accounts to find out what Bibiana is doing after The Bachelor. She's pretty active on both Instagram and Twitter, so fans can have some idea of her routine, but there aren't any clues at all that show how far she makes it in the competition for Arie's heart.

According to her official ABC bio, Bibiana is an executive assistant in Miami. And while her Instagram shows that she's been traveling with friends and soaking up the sun, Twitter tells a different story. The other day, she tweeted, "Someone brought their dog to work today. Everytime it barks it sounds like a cat in heat." In a second tweet, she wrote that she "loves dogs." So it sounds like Bibiana might be back in the office.

Either way, she really is someone we can all relate to, however, Instagram helps to tell an even more in-depth story of how she's been spending her time now that The Bachelor is done filming. For example...

She Spent Christmas With Friends

I don't know about you guys, but this looks like a really fun group!

Anyone else in love with this swimsuit?

She Hits The Gym With Her Squad

I admire her dedication.

She Also Has A Great Relationship With Wendy's

Total life goals, am I right?

She Loves A Good Brunch

So it looks like Bibiana is definitely back in Miami and living life, which means perhaps she didn't make it all the way to the end. Then again, maybe that's just what she wants us to think. But since she's already been starting fights with the likes of Krystal, she may be doomed to a two-on-one date elimination.

In case you missed all of the fun, during last week's episode, Krystal continued to interrupt other girls while they were with Arie, even though she had a full on one-on-one date with him. Meanwhile, Bibiana was starting to get restless about the fact that she hadn't really had a chance to talk alone with Arie. So when Krystal interrupted her one conversation with the former race car driver, she was not happy.

Honestly, I think that when you learn to speak to me like a normal human being and not with a fake tone, then I can actually respect you and listen to what you have to say. But if you really think that I’m going to fall for this little … [imitates her]. You have to be kidding me.

Krystal tried to defend herself by saying that she was only trying to "check" on how Arie and Bibiana were doing, which did not make any sense at all to the Miami native. "To check on me? Baby girl, it’s not about checking," Bibiana said. "If I’m trying to talk to my man, you need to back the f*ck up."

Bachelor Nation will have to wait and see how Arie responds (or doesn't) to all the drama. But judging from her social media accounts, Bibiana is killing it now that filming for the Bachelor is over. I can't wait to see where she ends up next. Maybe if she doesn't capture Arie's heart, fans will eventually see her on Bachelor in Paradise.