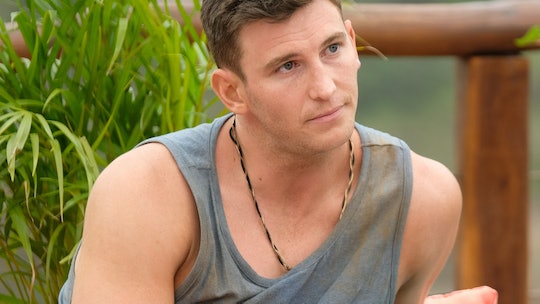 The sixth season of Bachelor in Paradise may have skipped the rose ceremony during premiere week, but given all the drama in the first two episodes, I'll let it slide. Fans — and contestants — were excited to see Bachelor Nation favorite, Blake Horstmann, arrive in Mexico. But, everything changed when Caelynn Miller-Keyes showed up and shared what happened at Stagecoach. Although viewers were ready to see the story unfold onscreen, a bit spilled over into real-life, and fans have been flooding Blake's social media more than usual. So what is Blake's Instagram? The Bachelor in Paradise star recently unveiled a few telling text messages, and everyone in Bachelor Nation is going nuts.

You can find Blake's Instagram account under the handle @balockaye.h. Since his time on Becca Kufrin's season of The Bachelorette, the Denver native has shared photos of himself with fellow former cast members like Colton Underwood and Jason Tartick. And while Blake doesn't seem to post as often as other Bachelor alum, the reality star has a few photos of himself scattered throughout his feed.

That said, if you saw Blake's most recent post on Aug. 6, you might have noticed it looks out of place in comparison to his other photos — and it is. After a confrontation with Caelynn in Season 6 of Bachelor in Paradise, Blake publicly addressed the situation and explained his side of the story on social media.

In the premiere of BiP, Caelynn revealed she and Blake hooked up at the three-day Stagecoach music festival back in Apr. 2019. However, she explained Blake also slept with Kristina Schulman within a 24-hour time frame, and after their fling, he proceeded to ghost her. Caelynn said Blake desperately wanted to keep their time at Stagecoach a secret. The drama then continued into the second episode, where Blake and Caelynn hashed out their past. Caelynn called Blake out for his disrespectful behavior and for calling her a "mistake." Meanwhile, Blake apologized and was left stunned.

Nevertheless, as the drama unraveled onscreen, Blake went to his Instagram Story and posted text messages which seemed to contradict Caelynn's narrative on BiP. Per People, Blake released the now-deleted texts because his character has come into question following the events on the show. Then in a separate post on Instagram, Blake addressed what was being shown on BiP, and although he took "full responsibility" for what happened at Stagecoach, he denied Caelynn's claims.

"This is the last thing I wanted to do, but my name and character are being attacked. My name is all I really have," Blake wrote, according to People. "Most of all, it is the only real way to prove that what is being said by Caelynn and the story that is being shown is far from the truth. I’m deeply sorry for my actions at Stagecoach but telling the world that I silenced a woman amongst many other harmful accusations was just too much.”

Regardless of how you feel about the situation, the truth is, this is a mess — and not the good kind. While all the drama seems fun onscreen, the spillage on social media puts a few things into perspective. Both Caelynn and Blake are real people who don't deserve to be publicly attacked online, and hopefully, the continuation of their narrative on the Bachelor franchise will allow for some closure in the future.

Bachelor in Paradise airs Mondays and Tuesdays at 8 p.m. ET.