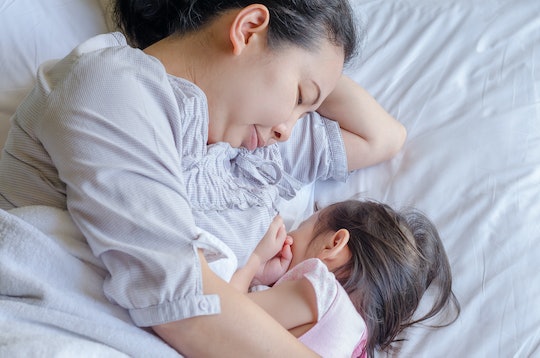 What Is Breastsleeping? It Sounds New, But It's Been Around For A While

There are a lot of things you have to figure out when you have a baby, but who knew that sleeping would be such a huge topic? Co-sleeping, sleep training, breastsleeping — all of it comes up at some point. Especially that last one. Many suggest that co-sleeping works great for breastfeeding mamas, but what is breastsleeping? Is it the best of both worlds?

Breastsleeping has been getting a lot of recognition thanks to Dr. James McKenna, director of the Mother-Baby Behavioral Sleep Laboratory at University of Notre Dame. In the journal, Acta Paediatrica, McKenna, along with fellow anthropologist Dr. Lee Gettler, argued that there is no such thing as infant sleep and there is no such thing as breastfeeding — there is only breastsleeping. The commentary suggested that co-sleeping, when the mother is sober and on the same surface as her baby (which is free of all hazards) and breastfeeding, she is doing the best she can for her baby in terms of sleep and nutrition.

Dr. Cecilia Tomori, anthropologist with postdoctoral training in public health, Research Associate at the Johns Hopkins Bloomberg School of Public Health, and author of Nighttime Breastfeeding: An American Cultural Dilemma is an expert on breastsleeping. She tells Romper that breastsleeping refers to the inextricable relationship of breastfeeding and maternal-infant sleep, and the idea behind breastsleeping helps to reinforce this relationship with just one term. As she explains:

This accomplishes several things. First, it helps to highlight the physiological interconnectedness of breastfeeding and sleep, including the importance of nighttime bodily closeness in establishing and maintaining breastfeeding, and the close physiological coordination of sleep and wakefulness between breastfeeding mothers and infants that makes this possible. Second, the term helps us rethink nighttime breastfeeding and infant sleep, which are usually treated as two separate categories in this cultural setting. We need to consider breastsleeping and all the complex physiological interactions in this concept as adaptations that ensured the survival of human infants.

Tomori notes that McKenna and Gettler ask us to think about nighttime breastfeeding and infant sleep as a unit, and in an evolutionary context. Because of this, it allows society to think about breastsleeping as an evolved, integrated relationship, which should be the basis for research into this area and against which other kinds of feeding and sleep arrangements are compared. "This has enormous implications for how we do research on breastfeeding and sleep, and the kinds of questions we ask in studies, which then get translated into public health guidelines and advice for parents," she says.

So why is it good advice for parents? Breastsleeping isn't just great for your baby, it's also good for moms too. Tomori notes that breastsleeping means moms get more sleep at night. "This is precisely because of the physiological coordination between moms and babies in the context of breastsleeping," Tomori says. "For instance, many moms who breastsleep report, and this has been observed though nighttime video observations as well, that they are not fully awake during these feedings. They don’t have to get out of bed and pick up the baby, who is often already quite hungry, to feed them, nor do they have to try to soothe the baby back to sleep after each feeding. This maximizes rest for both mom and baby." Tomori says more sleep is actually the primary reason why so many parents choose breastsleeping without necessarily intending to do so.

There has been so much debate between co-sleeping and separate rooms, breastfeeding and formula. But Tomori, along with McKenna and Gettler, believes that when practiced correctly, breastsleeping can be the safest choice for your baby and is safer than breastfeeding while your baby sleeps elsewhere or formula feeding, but co-sleeping. "Breastfeeding mothers are physiologically attuned to their babies — breastfeeding is part of complex physiological coordination between mothers and babies that includes touch, breathing, temperature regulation, heart rate, sleep cycles, and a whole host of processes that are taking place at the same time," Tomori says. "This proximity played a key role in enabling human infants, who lack the capacity to fully regulate their bodies, to survive. Does this mean that this system ensures that mothers are always able to spot when something is wrong? No, it does not. But it is quite a robust system. In fact, breastfeeding and sleeping next to babies remains very common cross-culturally and in many groups in the U.S. as well, and was the historical norm for most people around the world."

Tomori also notes that McKenna and Gettler have spoken about breastsleeping being practiced "in the absence of all known hazardous factors."

They are assuming exclusively breastfeeding a full-term, healthy infant on a firm surface (never the couch or sofa), without any soft bedding that can entrap or cover the head of the baby. They are assuming no smoking, no impairing medications, alcohol or other substances that can make the parent impaired are involved. This is not a blanket recommendation — it is using evolutionary thinking, observations in the lab, and cross-cultural practices to inform our understanding. It is also the recognition that evolutionary mechanisms underlie why so many breastfeeding parents find themselves sleeping next to their babies regardless of their intentions. So we need to help parents understand what is happening and how to minimize any potential risks involved. For some parents this will mean that they will do this in the context of breastsleeping, while for others it may involve sleeping within arms reach of their babies.

In short, if your baby is sleeping in your bed and you are breastfeeding, you're breastsleeping. But it's so much more than that. As Tomori points out, the word "breastsleeping" is just a term meant to unite the relationship of breastfeeding and maternal-infant sleep. It doesn't require a lot of work or energy. It is simply doing what feels most natural to you, and to your baby. "Breastfeeding moms are attuned to their babies in specific physiological ways and they usually place their babies under their arms (their arms blocking the pillow above), with the baby facing the breast, and their bodies curved around them, creating a safe space for the baby," Tomori says. "In fact, they spontaneously adopt this posture without ever being told to do so, which likely reflects another evolutionary adaptation."

And hey, if it gets you more sleep, what's not to love about it?