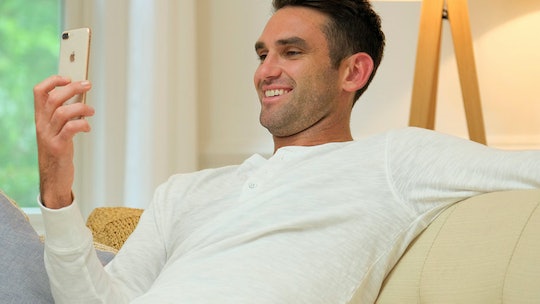 Bravo's Summer House is in full swing, and with only a few episodes left until the Season 3 finale, fans can't help but feel a little nostalgic. From the Vanderpump Rules reunion to three fresh cast members, the show's third season delivered a few gems that will go down in Summer House history. One of which was the very prominent hookup between newcomer Paige DeSorbo and Carl Radke. Now, with the season winding down, it's time to check out what the cast is up to, starting with social media — because obviously. So what is Carl Radke's Instagram? The Summer House star shares plenty of fun moments on his feed.

To no one's surprise, you can find Carl's Instagram account under the username @carlradke. And yes, the rest of his profile is just as straightforward as his username. Carl's bio simply states his hometown and lists out few of his current projects. It reads, "Raised by Pittsburgh. Spotfund Partner/Advisor. Salesman. Filmmaker. Investor. Bravo Summer House. Co-Host OneQuestionXYZ Podcast."

A quick glance at Carl's Instagram feed will also prove that the Bravo star loves three things — his work, his fellow Summer House cast members, and of course, his mom, Sharon Radke.

From the looks of his feed, it's pretty clear that Carl is proud of his projects. Right now, Carl is busy promoting his time on Bravo's Summer House, but prior to the Season 3 premiere, he posted a few photos featuring his OneQuestionXYZ Podcast and his involvement with Spotfund.

That being said, the many ongoing projects can get a little confusing for fans. So what exactly does Carl do for living? Well, in a recent interview with Watch What Happens Live with Andy Cohen, the Summer House star revealed that he actually got fired from his sales job at the start of the third season. However, he eventually found a home with Spotfund and he's been working for them ever since.

"I'm currently working for Spotfund," Carl said. "It's a social impact company. It's basically like GoFundMe but for non-profits. Things are going well. I got a job."

As I mentioned, Carl has been promoting Summer House on his Instagram. He frequently posts photos with his fellow Bravo cast members. But, that isn't to say they aren't close. Recently, Carl posted a throwback photo with co-star Kyle Cooke. "Having each others side since DAY 1," Carl captioned the photo. Cute.

During the holiday season, Carl also shared a few pictures of his Summer House family. One featured a pic that was moments before his fall in the pool on the Bravo television series. In the caption, Carl apologized to Paige, but added, "At least we had some really cool kids in attendance to watch in person." In another holiday photo, this time shared with Kyle, Carl gave fans a taste of the hilarity that ensues when these two are involved.

"This picture is the gift that keeps on giving," Carl captioned the pic. "Lot to unwrap here. My shorts. Kyles hose. The trash can of water. My socks. Kyles 🌲 outfit. Maybe next year we do a Secret Senda 🎅🏼"

If you do a quick scroll through Carl's feed, you might notice that there's one special lady that is featured time and time again. And of course, that person is Carl's mom. The reality star has posted a number of photos with his mom, including a few grainy childhood photos. Yes, they are as adorable as you might think.

On Mother's Day, Carl posted another throwback pic with his mom, along with a heartfelt message.

"Happy Mother’s Day to all the amazing women out there," Carl wrote. "Mom, just want you to know that you are my rock and my inspiration. I love you so damn much. Don’t hate me for this throwback picture! You are my first love. Can’t wait to share more amazing things with you."

From his sweet relationship with his mom to his connection with the Summer House cast, Carl has plenty of quality moments to share on his Instagram. Now, if only he could get his relationship with Paige sorted out...