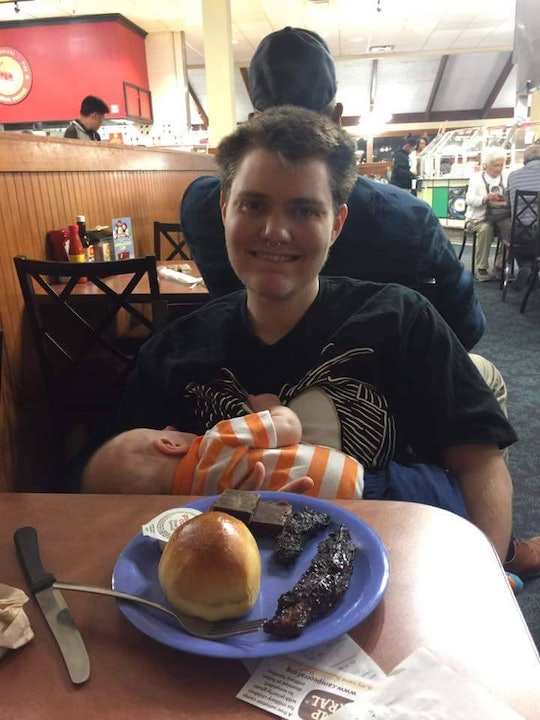 Breastfeeding is a universally known term — a mother uses her breasts to feed her baby. But mothers aren't the only ones that can lactate and nourish their children, which is where a new term comes into play — chestfeeding. But what is chestfeeding? Is it that different from breastfeeding?

Not really. International Board Certified Lactation Consultant Rachel O'Brien noted on her website that chestfeeding is the term often used by transgender men who nurse their babies, but are uncomfortable with the term breastfeeding. Because breasts are most often associated with women and their bodies, some transgender men may find that chestfeeding is a less distressing term for how they are feeding their baby.

There's a lot of controversy over the term. If both men and women have breasts, why should there be a term called "chestfeeding." A breast is a breast no matter your gender. Scientific American noted that both men and women can lactate, but for cisgender men, it probably won't come naturally. So why chestfeeding?

Because not all men who chestfeed have breasts. In a study published in BMC Pregnancy and Childbirth, researchers looked at the experience of transgender men through pregnancy, childbirth, and feeding their newborns. Of the 22 participants, nine had chest masculinization surgery before they conceived their babies, six had the surgery after they gave birth, five wanted the surgery in the future, and two participants did not want the surgery at all. According to The Philadelphia Center for Transgender Surgery, chest masculinization surgery includes removing female breasts to create a male chest, but doesn't remove all of the mammary tissue.

But whether most of the participants had the surgery or not, the study found that nearly all of them avoided the term breasts and preferred to call their upper torso their chest. When it came to feeding their children, however, there was a wide variety of terms used. Six participants used the term breastfeeding, four used the term nursing, three preferred chestfeeding, and some used a combination of terms like mammal feeding and nursing or feeding and mammal feeding.

Sabastion Sparks, a transgender dad, tells Romper that while he doesn't really use the term chestfeeding to identify how he feeds his child, he doesn't use the term breastfeeding either. "I don't like either — breastfeeding makes me feel dysphoria, so I try not to use it very much," Sparks says. "I just feed my kid like any other parent. It's not about how he gets the food, it's the fact he has a full belly."

Chestfeeding is simply a term. It's not the way anyone has to refer to nursing, but it is a term that can be used by cisgender and transgender parents alike — it's a way to describe feeding your baby. Because breastfeeding isn't exclusive to cisgender women, it's important to have terminology that feels inclusive to all parents, no matter their gender.

For many, that means using the word chestfeeding. The study in BMC Pregnancy and Childbirth found that participants who did have chest masculinization surgery did so because of chest-related gender dysphoria and being identified as female because of the way their chest looks. When you consider that, using the term breastfeeding could be especially triggering for a transgender man, making chestfeeding a term that needs to be universally recognized by support groups, doctors, and society.

Sparks tells Romper that he wishes more people were OK with trans men "feeding their kids straight from the tap", but he's found support through his own doctors who haven't given him any problems about feeding his son. "Even WIC has been really supportive and provided me with a breast pump so I could continue giving my own milk instead of having to switch to formula during work," Sparks says. But he also mentions how breastfeeding products don't promote inclusivity. "I hate hate hate nursing products with a burning passion," he says. "I prefer to pump and store milk a lot because it's hard to nurse in public with a full beard. The milk storage bags all say 'mother's milk'. It bugs me to no end because I'm not mom, I'm dad." To combat those feelings of dysphoria, Sparks says he started crossing out the word "mother's" with a Sharpie and started writing funny names like Batman.

Breastfeeding as a transgender man can be difficult enough, but doing it in public can make it even harder. Sparks says that while at Wal-Mart one day, his son became hungry, so he decided to just start feeding him. "I couldn't stop to think what people would think of me, my son was hungry — that's all that mattered, so I fed him while walking around shopping," he says. "A man's got to do what a man's got to do."

Cisgender or transgender, all parents want the same thing — they want their babies healthy, happy, and fed. If that means using the term chestfeeding to make them feel comfortable or using the term breastfeeding, it really doesn't matter. Like the debate between formula and breast milk, the best kind of baby is a fed baby, whether it's mama or daddy doing the feeding.