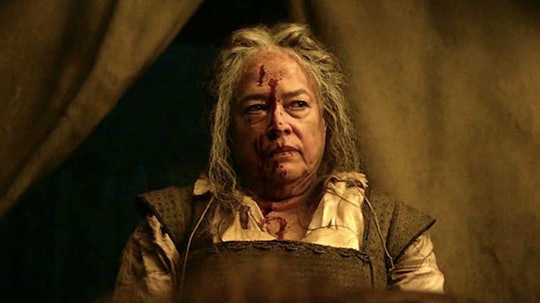 What Is Croatoan On 'AHS: Roanoke'? It Could Be The Key To The Mystery Of The Lost Colony

So far, this season of American Horror Story has brought with it all kinds of questions that seem to double by the time each episode is over. But, the masochists that we are, we keep coming back because sooner or later, we'll get the answers. And a lot of the questions that keep coming up revolve around the mysterious Lost Colony we've been seeing more and more of. So what is Croatoan on AHS: Roanoke? Most recently, we saw the boys who were drinking milk from a dead pig shouting it while under observation at the hospital, but this isn't the first we've heard the word in the AHS universe.

Back in Season 1 of AHS, psychic Billie Dean told the story of the lost colony of Roanoke and how native tribes allegedly used the word Croatoan to banish the spirits of the dead colonists still haunting he land they'd once settled on when they came from England. In the story, it worked, and the spirits were banished, but on the first season of AHS, when Violet Harmon tried to use the word to banish ghosts from her own home, it was pretty anticlimactic. So what is Croaton on AHS and what is its actual significance?

While Season 6 of AHS is using the lost colony as inspiration and a reference point to an extent, there is still so much more they obviously plan on doing with the season and with the haunting at the farmhouse. So it makes you wonder which part Croatoan is going to play as the season goes on. And it could likely mean one of two things.

It's A Word Used To Banish Evil Spirits

Like we saw in the first season, the word Croatoan could be used as a simple one-word banishing spell to rid yourself of unwanted spirits, but if it didn't work for Violet, then what gives? If Billie Dean was right and Croatoan is used to banish spirits, maybe it only works when used at the site where the Roanoke colonists disappeared in the late 1500s. More than 100 new settlers vanished and were never heard from again, but according to Billie Dean, their spirits stayed on and, for lack of a better word, haunted the land.

If Croatoan is used to banish spirits, but only in the area where the lost colony was, then it would also explain those feral boys shouting it in the hospital. We obviously still know nothing about them and they aren't ghosts, but they might know something about the spirits roaming the huge property surrounding the farmhouse.

It's An Old Native American Tribe

In the story of the lost colony of Roanoke, the Croatoans were a nearby Native American tribe that inhabited Croatoan Island, which is now Hattaras Island. The governor of the lost colony, John White, who'd gone to England for supplies and game back years later to an abandoned village, is said to have believed that they might have actually went to live among the Croatoans.

But if that's the case, what is the significance of shouting "Croatoan" in AHS and how is it going to play out this season? In the most recent episode of AHS, The Butcher (Kathy Bates) is seen eating a bloody heart from the hands of a woodland woman (Lady Gaga), who magically releases the cage shackled around the colonist's head. So is Gaga a Croatoan, there to take The Butcher and some of the colonists into her tribe? At this point, literally anything can happen.

Chances are, Croatoan on AHS can mean either of these two things and either one will make an impact on the stories of Shelby, Matt, and Lee as their story continues to unfold in the faux documentary.