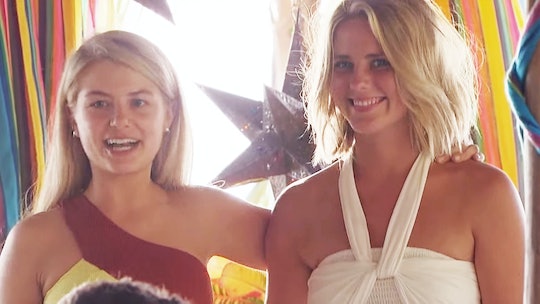 Demi Burnett and Kristian Haggerty are quickly becoming my favorite couple on Bachelor in Paradise Season 6. In the second half of Week 3, Demi told host Chris Harrison she couldn't stop thinking about a girl back in Los Angeles, despite her blossoming connection with Derek Peth. In an unprecedented move, Chris then decided to bring Kristian to Mexico, and after an emotional hello, Demi made up her mind and chose Kristian. But, as with any introduction on the ABC reality series, fans were intrigued. Luckily, social media exists, and Demi's girlfriend's Instagram from Bachelor in Paradise tells you everything you need to know about the new arrival.

From the looks of Kristian's Instagram profile — which you can find under the handle @kristianhaggerty — the latest BiP cast member is as straightforward as she comes across on TV. She is a Christian from Los Angeles who works in commercial and music video production, according to her bio. She is also an ordained minister and "living to love." And as with most profiles on the Facebook-owned platform, Kristian's feed is filled with photos of herself living her best life with friends and family.

Kristian has also been spotted with members of Bachelor Nation in the past. She posted a photo celebrating 18 years of friendship with with Catherine Agro from Colton Underwood's season of The Bachelor. The Stetson University grad may have also hinted at her relationship with Demi back in April 2019, as she released a photo featuring the reality star with the caption, "The one thing missing to complete a perfect weekend ❤️"

Although Kristian hasn't added a photo with Demi since the couple made their official debut on reality TV, Demi made the pair Instagram official with an adorable pic from their date night on BiP. "Thanks for coming to Paradise," Demi wrote in the caption, adding a heart emoji.

Ever since the photo of Demi and Kristian was posted online, loving comments from fellow Bachelor Nation stars — like Wells Adams, Nicole Lopez-Alvar, and Kirpa Sudick, just to name a few — came flooding in.

"Hey Demi," Jordan Kimball wrote. "You know you’ve got all the support in the world on this side, keep fearlessly being you."

Meanwhile, Caelynn Miller-Keyes gushed, "Ugh I love you both so much. So happy for you guys."

It's pretty clear the Bachelor Nation crew is one tight-knit family. The show's willingness to include a stranger in Paradise was also a testament to the franchise's love for Demi. Following the episode, Chris explained why the decision to keep Demi and Kristian in Mexico was a no-brainer.

"When this situation presented itself to us with somebody we really love and care about in Demi, I think our initial instinct was the right one: 'Let’s lean into it. Let’s go there. Let’s explore this,'" the host told The Hollywood Reporter. Chris also mentioned that while there are no official rules the Bachelor franchise plays by, it was still "a pretty easy but big decision to go down that path with Demi, especially since it’s with someone who is outside of our franchise and our family."

So what's on the horizon for Kristian and Demi on BiP? Chris promised more "genuine" moments from the couple. And honestly, I'm so here for it.

"The reason why it works so well — and in my opinion it does work — is because [Haggerty] is so innocent and naïve about the world she’s about to come into, that you can tell it's 100 percent genuine," Chris said.