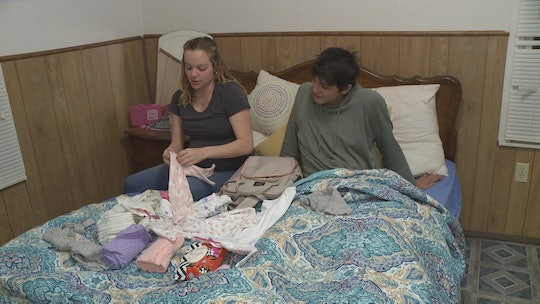 Emiley's Daughter From 'Unexpected' Has The Cutest Name

Emiley was a new addition on Season 2 of TLC’s teen pregnancy reality series, Unexpected. The 18-year-old was pregnant with her boyfriend Diego’s baby, and since the birth of their child, it’s safe to say their life has changed. Fans know that she gave birth to healthy baby girl, but what is Emiley’s daughter’s name from Unexpected? Her name is Aria Beckett Reyes, and she was born as a Valentine’s Day gift to her mom.

In an Instagram post from Feb. 14, Emiley announced the birth of her daughter with a post-labor picture. “Hands down the best valentines gift, miss. Aria Beckett Reyes was born at 9:05 this morning. She weighs a whole 6 pounds and 3 ounces and is 20 inches tall, ” she captioned the photo. Emiley described how her newborn was already making funny faces, and grabbing fingers, adding, “We couldn’t ask for a more perfect amazing beautiful daughter! Mommy & Daddy love you Aria Beckett.”

In another video, Emiley talked about all the names she considered naming her baby before finally deciding on Aria Beckett. If she had a boy, Emiley said her name choices included Mateo, Payton, Creed, Ace, and Ronny. For a girl, Emiley considered the names Grayce, Ashton, Maya, Alynne, and Payce. She explained her love for the names, attributing things like personality characteristics and family history to each. Emiley also mentioned her hopes for future children, adding “hopefully some of these names will be the names of my dear children in the future.”

From the looks of it, Emiley seems to be a really loving mom. She commemorated Aria’s 7-month birthday with a series of photographs, highlighting the mother and daughter’s journey from her pregnancy to now. “7 months in vs 7 months out. Aria can stand up on her own, say mom, dad, baba (bottle), & hungry, she can walk with her walker, & she loves her some blueberries,” she captioned the pictures. But Emiley isn’t the only doting parent in the picture. Diego’s Instagram page is filled with pictures of Aria as well, and in his captions, as Emiley mentioned in the video, he calls her by her middle name, Beckett.

Little Aria Beckett has her own Instagram page too, and on it you’ll find plenty of adorable picture of her with her parents, family, and friends. There are posts of her first visit to the zoo, and a picture of her supporting her dad on the football field during one of his games. “He may have scored the first touchdown,” the caption reads, “but I scored by having him as my dada.”

It’s nice to see both Emiley and Diego happy together, and most of all, doting on their daughter. It can’t be easy balancing school with a baby, but the two are making things work. And while they may not agree on Aria Beckett’s name they seem to be very devoted parents, and their dedication to each other and their family shows.

More Like This
'Squid Game' Is Coming Back For Season 2 On Netflix: Here’s What Parents Need To Know
'The Proud Family: Louder & Prouder' Is Returning For Season 2 On Disney+
The Office Halloween Episodes: A Definitive Ranking
Kim Kardashian Stars In Hilarious House Of The Dragon Parody, The Targashians