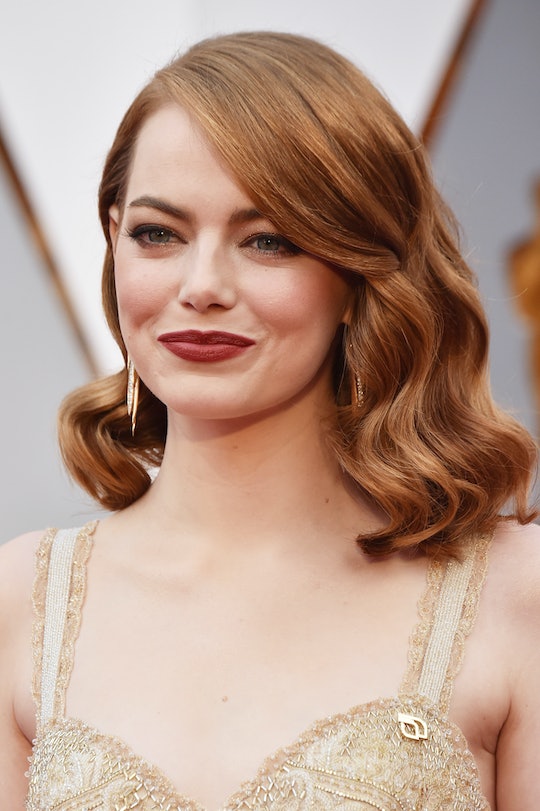 Emma Stone's Oscars Pin Is For A Great Cause

There was no shortage of political statements at the Academy Awards, some more subtle than others. What was Emma Stone's pin at the 2017 Oscars? Stone was wearing a subtle pin of the Planned Parenthood logo, a low-key nod to a very important cause for women, particularly in this turbulent political climate we're in.

The first political accessory people noticed on the red carpet actually belonged to Ruth Negga, nominated for the movie Loving. She wore a blue ribbon for the ACLU pinned to her gorgeous red gown, and so did Lin-Manuel Miranda and Karlie Kloss. Stone's political accessory was so small and subtle that on first glance it could have been mistaken for a Tiffany broach or some other glamorous jewel. It's only on very close inspection that one can actually see the Planned Parenthood logo. While some people like to say that celebrities have no business making political statements, it has always been my contention that people with a platform have a right to speak their minds, and a real opportunity to be a force for good. It's so heartening to see that while President Donald Trump may bluster about everyone being overrated and fake news, etc., artists have not stopped standing up for what they believe in.

It's an important time for women to stand up for our rights, as there is a very real effort from our government at the moment to take them away from us. Legislators are actively trying to take away our reproductive rights. This is the world we are currently living in. It's still a scary time to be a woman, and we need women in positions of authority and power to stand up for us right now more than ever. Stone may not be a politician or a lawmaker or a journalist, but she's a woman and she has a platform, which is why it is so amazing to see her standing up for women everywhere at the biggest moment in her career.

Perhaps in response to Donald Trump, or perhaps in response to the completely whitewashed Oscars of 2016, this year's Oscars was filled with political messages of inclusion and diversity for all people. From host Jimmy Kimmel's near constant Trump digs to the creators of the film Zootopia talking about the diversity in their animated movie, this year's Oscars was all about political correctness, and I am all about it.