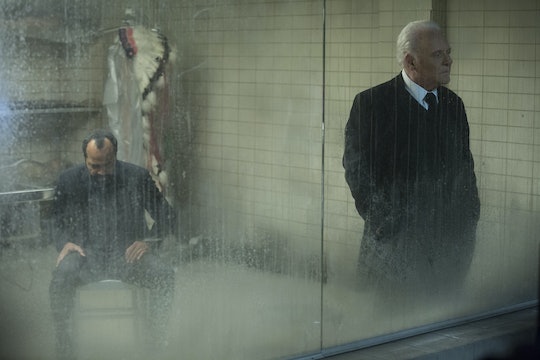 What Is Ford & Arnold's Backstory On 'Westworld'? There's More To Their Story

With the big reveal that a long-cherished fan theory was actually correct — that Bernard is a host version of Arnold — viewers are now left wondering exactly what is Ford and Arnold's backstory on Westworld? There's surely more to their relationship than just what we've seen on the show so far. After all, it's been pretty clear that as much respect as Ford had for his departed (sort of) partner, there was also quite a bit of mistrust and friction between them, both about the nature of the hosts themselves and the humans proper relationship to them. But then again, he did take the trouble to recreate him in host form. So what's the deal?

From what Ford has said so far, we know that he and Arnold had intrinsically different views on what the hosts' consciousness could or should be. Arnold was interested in creating a mind that would essentially make the hosts human. It's evident from his interviews with Dolores that he had some sort of affection for her, out of either pride or simple love. He treated her with a respect that Ford has never shown to any of his creations, even to Bernard. And then, it was revealed that Dolores was the one who killed Arnold, which I can only imagine was at Ford's direction. After all, he's done it before.

In most cases (at least in the fictional world), rage and hate like this are usually motivated by love or jealousy. One theory posits that Ford was romantically in love with Arnold, explaining his apparent obsession with him, and the joy he felt in watching Bernard kill his lover Theresa. Perhaps Ford was jealous of Arnold's affection for the hosts. There hasn't been a whole lot more to substantiate this theory, other than the fact that Ford missed his old friend enough to recreate a version of him that he could control absolutely.

It's also possible that Ford and Arnold's relationship goes back farther than their professional relationship. Perhaps they knew each other from childhood — or maybe Ford and Arnold were even brothers. Remember that photo that Ford showed Bernard in which Bernard-as-Arnold didn't appear in until the second to last episode? The other man in the photo is Ford's father, suggesting that Arnold at least knew, or was perhaps quite close with Ford's family. They have different last names so it's possible Arnold was somehow adopted into Ford's family, thus creating the sort of sibling rivalry which led eventually to Ford ordering Arnold's favorite creation, Dolores, to kill him.

Either way, there's only one episode left until we find out, so hold tight. I'm sure the finale is going to be a doozy.