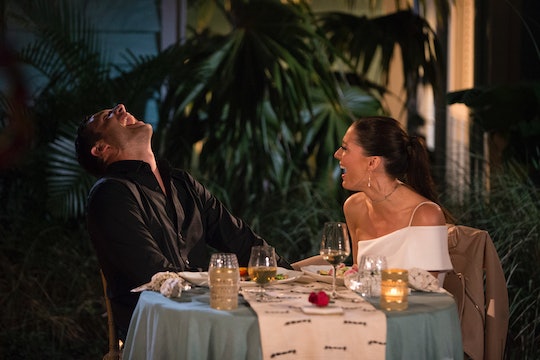 Garrett Appears To Be Living His Best Life

The Bachelorette is, unfortunately, coming to a close soon. It seemed like just yesterday Becca was meeting her men for the first time, mini vans and all. Speaking of which, what is Garrett doing now after The Bachelorette? He's down to the final three on the show, but filming ended months ago so he's been living his post-Bachelorette life for a while now.

Since Garrett is still on the show, he and ABC keep it quiet to what he's really up to right now — if it's Bachelorette-related anyhow. According to his Instagram, Garrett is doing what most dudes fresh-off The Bachelorette do with their time: hiking, hanging out with friends, and taking photos of his dog. He doesn't seem to have a LinkedIn account, but Garrett's ABC biography says he's a medical sales representative in Reno, Nevada. "Raised in a small town in Central California, Garrett is a true outdoorsman who loves fly fishing, hiking and snowshoeing," his biography states. "When he's not on an outdoor adventure, he's perfecting his Chris Farley impression. He's excited to find love with the Bachelorette…down by the river!" Garrett did indeed show off his fly fishing skills during the premiere, but there hasn't been much else since then.

Garrett's hometown date was pretty uneventful, especially considering what happened after Colton's date (aka Tia revealed her ~feelings~ to Becca and shook things up). One thing that did keep coming up, however, was Garrett's ex. Garrett married Kayla Cunningham in 2015, but they were divorced six months later. This was, of course, brought up during Garrett's hometown date.

Both his parents and sister were particularly worried about him. It was the first time he brought a woman home since his divorce, so it makes sense. While Garrett's family didn't go into details, it was clear Garrett's heart was broken from the divorce. He even alluded to some bad behavior on his ex's part after they were married. "She was very emotionally abusive… She would take me down emotionally and then build me back up," Garrett said. He also mentioned that his ex-wife would keep him away from his family.

After the Bahamas date, when Garret revealed more about himself and his first marriage, Becca felt an even stronger connection to Garrett. In her blog for People she said, "He was able to be so open about his past relationship, and I so appreciated his honesty. But when he continued to tell me he was falling in love with me, I knew in that moment I saw a future with him as well." She went on to praise what he might look like as a partner and father. "Garrett even built me a sand castle dream house that we would live in one day! It was so creative and really made me see how great of a Dad and husband he could be."

While Garrett has kept the details of his post-Bachelorette life quiet (for obvious reasons) he's certainly giving the impression that he's perfectly happy, whether that's as Becca's future husband or runner up. And I can't wait to see how this all shakes out.