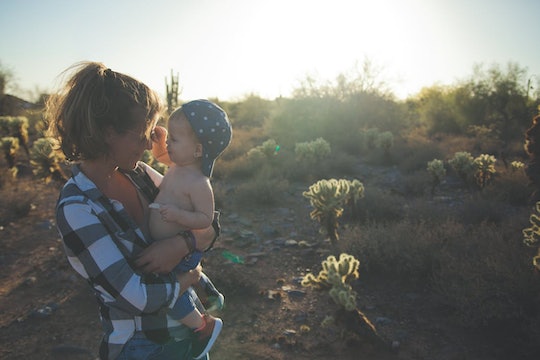 Everything You Need To Know About Gentle Parenting

There's a running joke that parenting doesn't come with a manual, but there are more than enough parenting styles, like gentle parenting, to try if you're hoping to get some kind of template for raising kids. (You'll probably scrap it and start over a million times, though.) But what is gentle parenting? Is it any better than using basic intuition?

The Gentle Parenting website broke those three words down a little more specifically and noted that there are some ways to transition into more gentle parenting, like resolving to respect your children (listening when they throw a tantrum, respecting their decisions not to eat certain foods), resolving to empathize with your child (listening to their feelings instead of putting them in timeout, giving them hugs at night instead of crying it out), and allowing your children to have their own opinions and make their own choices (letting them make mistakes, allowing them to make age-appropriate decisions).

In short, gentle parenting is a lot of listening to your child. There are moments where your toddler is throwing a horrendous tantrum in the grocery store and your thought process may be to pick them up, put them in timeout, and tell them very strongly how bad their behavior is and that you expect better of them. But gentle parenting suggests that you listen to why your child is throwing the tantrum and try to empathize with them and understand their feelings. Everyone has bad days and outbursts, including adults, so why not listen to your child's, too? That's the basic idea behind gentle parenting.

The parenting style can also carry into big decisions you make for your child and carry on as they grow up rather than focusing on babies and small children. Instead of setting a routine deemed appropriate by experts, for example, Ockwell-Smith suggested on her website that you follow your child's natural rhythm. Rather than forcing a child to walk at an appropriate age or to eat certain foods, you should recognize that every child is different and focus on your little one's individual needs.

It's a lot of feeling your child out, hearing their emotions, and recognizing that they are little people with needs, wants, and desires that may not fit your ideas or standards. Is it right for everyone? Maybe not. But parenting is based on a whole lot of instinct, and so is gentle parenting, so remember that you can adopt parts of the style that work for you and your family without feeling like you're following a manual. (That doesn't exist; I promise you, I've looked.) That's the entire idea behind gentle parenting: it's a way of being, not a way of doing, which is great, because you have plenty to do already.