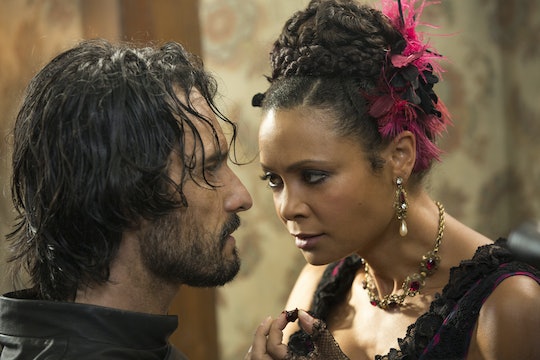 What Is Happening With Maeve On 'Westworld'? The Host Is Increasingly Self-Aware

Out of the many robot characters on Westworld who are gradually coming closer and closer to the truth about their existence, one seems nearest by a wide margin. That's Maeve, the brothel madam at the Mariposa Saloon. On Episode 4, we saw much more of Maeve as she struggled to deal with her increasingly disturbing flashbacks. Maeve was largely absent from the series' fifth episode – save being the central figure in tonight's major cliffhanger. But exactly what is happening with Maeve on Westworld?

Last week's "Dissonance Theory" ended with a big, Maeve-centric moment. Throughout the episode, Maeve had been growing more and more unnerved with the apparent "visions" she'd been having. She even sketched out a drawing of one of the Westworld maintenance workers that she'd remembered from the visions she at first assumed were nightmares – of course, in reality, they are memories from all of the times the employees have worked on her. Maeve was certain that she had something inside her and sure enough, when she had outlaw Hector cut her open, they found the bullet that the clumsy Westworld workers had forgotten to remove. This revelation distressed Maeve but also led to a super steamy sex scene atop a safe.

Nothing like having a hot bandit dig a bullet fragment out of your stomach while he's breaking into a safe and the authorities are breaking down the door to get you in the mood!

After Maeve's revelation and her romp with Hector, we didn't see her again for the majority of tonight's "Contrapasso." The only glimpses of Maeve were of her lying prone and (seemingly) deactivated as the two maintenance workers patched her up, getting her ready to go again for another day on the "job." Importantly, these two workers were the same two who'd worked on Maeve when she "awakened" on the operating table back on "Chestnut," earlier this season.

Felix, one of the workers, was spooked by the earlier incident with her, increasingly convinced that something strange was going on with the robot, despite his co-worker teasing him mercilessly about his fear. As it turned out, Felix was 100% right to be concerned.

Maeve awakened yet again while she was supposedly in "sleep mode," but this time, she appeared to specifically wait until Felix was alone. That alone indicates that she's much more in control of the situation now, as opposed to when we last saw her and she was flipping out. She surprised Felix by sitting up and speaking to him while he was surreptitiously working on repairing the damaged robot bird that he'd snuck out of the park. To Felix's shock, Maeve, stark naked and with the little robot bird perched on her finger, calmly told him that they needed to have a chat. And that's where we ended the episode.

This game-changing cliffhanger sparks so many questions. How, exactly, is Maeve waking herself up from sleep mode? Why is she not absolutely freaking out that she's totally nude and on an operating table? What, precisely, has Maeve pieced together between the time we last saw her frantically making out with Hector on "Dissonance Theory" and her tete-a-tete with Felix? All of these questions – and so many more – have us eagerly awaiting next week's "The Adversary."