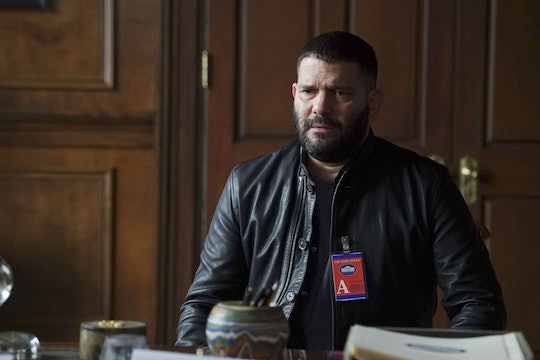 It's almost unbelievable that Scandal is now on it's sixth season and about to hit 100 episodes. The show shocked fans in it's very first episode when it was revealed that protagonist Olivia Pope was involved in her very own scandal with President Fitzgerald Grant. The show wasn't just about them, however. It also followed Oliva's team, which, at the start, included Abby, Harrison, Stephen, Quinn, and Huck. Now in the 100th episode, fans will get to see where their favorite characters would've ended up if things had gone a little bit differently. So what is Huck doing in the alternate reality on Scandal? It's hard to say.

The alternate reality begins with Olivia making a different choice about rigging the election that made Fitz president. However, Huck, who's real name is Diego Muñoz, was already Huck by then. He had already enlisted in the CIA, worked for Command, was taken away from his wife Kim and son Javi, and, well, you know the rest. By the time Olivia got her hands on him he was homeless, having just been kicked out of the CIA/B613. Olivia first enlisted Huck's help for Fitz's presidential campaign and that still would've occurred, prior to her decision not to rig the election. So odds are Huck and Olivia would still be friends. Probably.

He never would've met Quinn though. The whole reason Quinn became Quinn in the first place was because of the election rigging and the murder of her boyfriend and his co-workers that followed. Since that never happened, Huck would've never needed to drug and kidnap Quinn and then later fall in love with her and train her to be the killer she is today. Granted, Quinn and Huck ultimately ended up breaking up and now she's engaged to someone else, but after last week's episode fans can't help but wonder if Quinn and Huck will get back together.

Either way, there's a good chance that Huck is still single in the alternate reality and still working for Olivia in some capacity. Alternatively, he could've also decided to try and get his life back with Kim and Javi, as he did in past seasons, except in the alternate reality maybe it actually worked. Maybe Huck found happiness with his family and stopped killing altogether. That seems like a bit of a stretch but, really, who knows?

Thankfully, fans won't have to wait long to find out what really would've happened to Huck in this upside-down world. Scandal's 100th episode will air on Thursday night at 9 p.m. ET on ABC.