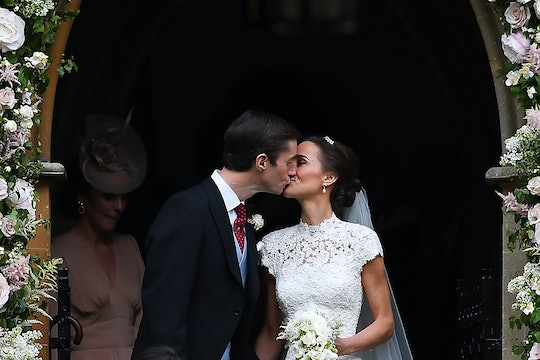 It's an exciting time for the royal family, isn't it? As Kate Middleton's due date draws near and the royal wedding's final preparations are being made, another notable name from across the pond reportedly has some big news as well. According to Reuters, Pippa Middleton is reportedly expecting her first child. While royal watchers probably know all about Duchess Kate's little sister, they might have some questions about the rumored mom-to-be's other half. Like what does Middleton's husband do for a living and what is James Matthews' net worth?

With what he brings home as a financier, it's clear that Matthews can definitely provide for his family, whether that be just him and Middleton or the couple with a baby. But, let's talk numbers: according to The-Net-Worth, the reported dad-to-be is estimated to be worth about $2.6 billion. Yes, you read that correctly, he's reportedly a billionaire. And it seems like Matthews is definitely smart with his money, too. According to Heavy, Matthews learned a lot about finance and, as such, he eventually chose to start his own hedge fund group, the Eden Rock Capital Management Group, in 2001.

His investments have obviously paid off, as Matthews is worth more than Kim Kardashian, who is worth an estimated $175 million, according to TIME Money. To Matthews, that's chump change, folks. And as People has reported that Matthews and Middleton are expecting their first child together, it's likely that all his saving and investing will have definitely paid off. Romper's request for comment was not immediately returned, and a rep for Middleton declined to comment to People.

But, nevertheless, if Middleton is, in fact, pregnant, then her child will certainly be born into a financially stable home. What's more, their child might very well have a title of their own one day, although it won't be as noble as Middleton's nephew and niece, Prince George and Princess Charlotte. But, according to Business Insider, Matthews is an heir to a Scottish title, the Laird of Glen Arric, which is currently held by Matthews' father. Matthews' father is the owner of a huge Scottish estate, including 10,000 acres not too far from Loch Ness. So, when Matthews inherits his father's title, Middleton will also get a title: Lady Glen Affric.

While it's no heir to the British throne, the fact that Matthews is now related to not one, but two prominent families is certainly interesting. The 42-year-old investor wasn't really in the press before his engagement to Middleton, but it's clear that his family, as well as his impressive resume, have led him to a noble life with a hefty net worth.

Although news of Middleton's reported pregnancy is still unconfirmed, it's pretty exciting to imagine that the 33-year-old might be pregnant at the same time as her sister, who is due to give birth any day now.

Even the idea of Middleton's pregnant is exciting for royal fans, who've watched the younger Middleton come into her own over the years, especially after she stole the show at Duchess Kate's wedding to Prince William. According to Town & Country magazine, the mom-to-be was reportedly excited when she discovered she was pregnant. "When Pippa found out she was pregnant, she was obviously thrilled and utterly overjoyed," a source reportedly told The Sun "Naturally, big sister Kate and parents, Carole and Michael, were the first people she told — James aside — and they could not have been more delighted."

Now, the world must simply wait until Middleton and Matthews address the happy news themselves. Fortunately, royal fans can stay fairly occupied with the other, confirmed Middleton pregnancy at the moment as well as the royal wedding of Prince Harry and Meghan Markle happening on May 19.