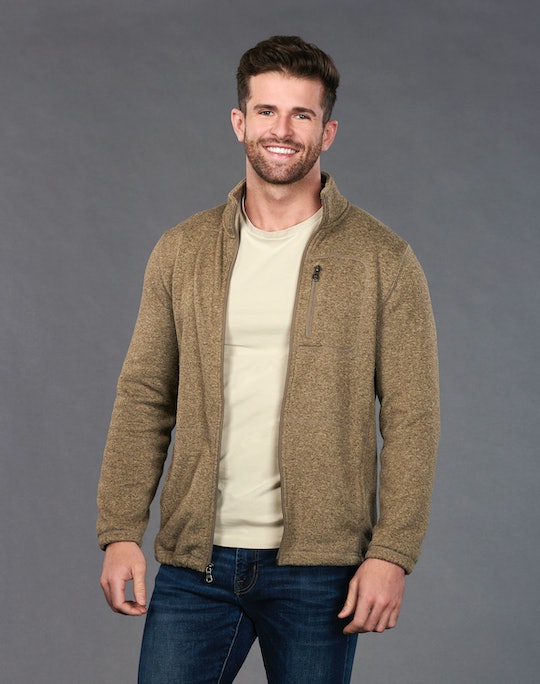 Jed's Job Outside Of 'The Bachelorette' Might Grab Hannah B.'s Attention

Hannah B.'s season of The Bachelorette is sure to be full of southern gentlemen, contestants who aren't afraid to shout "Roll Tide" four times in one episode, and maybe a few who are actual frontrunners for her heart. Jed Wyatt might be a little of all three, and ahead of Hannah B.'s season, you can already tell that he has the whole southern gentlemen thing down. But what is Jed's job on The Bachelorette? He's from Nashville, so obviously he wouldn't be a reality show contestant if he wasn't also an aspiring performer.

Jed's official job title on his Bachelorette bio is singer/songwriter and it seems like he is going to lean heavily on that side of him to win Hannah B.'s heart this season. According to his bio, his last relationship ended so badly that it made him stop writing music even though Jed expresses himself best through his music. I can already see him exiting the limo with a guitar strapped to his body and I don't know yet if I will love it or have secondhand embarrassment.

Jed's Bachelorette bio also says that he can effortlessly rap Nicki Minaj's part in the song "Bottoms Up," so maybe the focus on Jed's music this season won't be all about love songs.

Unfortunately, Jed's Instagram is private right now, but his bio does have a link to his most recent single. So either he got over that breakup pretty quickly or Hannah B. inspired him to write more music. Either way, music is the main focus of his career and it will likely be Jed's *thing* this season.

Judging by Jed's music on Spotify, he favors more of a pop sound with some acoustic undertones than country, but with his Nashville roots, I'm sure Bachelorette viewers will get to hear him croon out a love song or two. He hasn't released any albums yet, but it looks like Jed's music career only got started a few years ago, so there is still plenty of time for him to release more music and really get his career off the ground.

In addition to working as a singer/songwriter, Jed might also moonlight as a male burlesque dancer. He was tagged in a September 2018 post of himself on Nashville's Music City Male Revue Instagram account. Jed doesn't seem to advertise that part of his life on his Facebook profile, which isn't private, but if that's how he picks up a little money while trying to make it as a musician, there's no harm in that.

According to Jed's website, he spent the better part of the summer and fall of 2018 playing different shows in and around Nashville. He definitely seems to be serious about his music career and I'm sure Hannah B. will admire that part of him this season. As long as he doesn't try to force his singles down viewers' throats, that is, because that's not fun for anyone.

It's possible that Jed has another job outside of his burgeoning music career, but it seems like he would rather have Bachelorette fans know that he is working on his music above all else. Right now, I can't say for sure how far he goes this season, but it is very likely that he is going to stand out from some of the other guys right away. Hannah B. will probably be attracted to her fellow southerners right off the bat and if Jed can also sing to her and play the guitar, then he's basically golden for at least the first few weeks. As long as he doesn't ruffle too many feathers, Jed could go far this season.