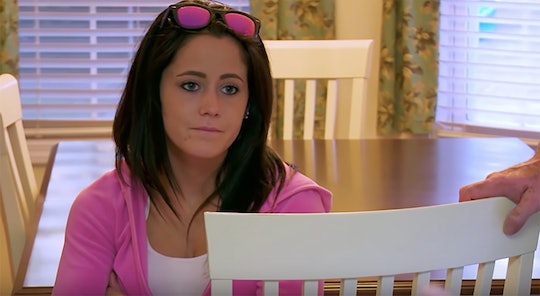 Former Teen Mom 2 star Jenelle Evans lost her job at MTV on Tuesday, May 7, just weeks after her husband, David Eason, admitted to murdering her young dog, Nugget. And amid all of the drama, some fans are eager to find out what Jenelle Evans is doing now. Unfortunately for the ex-reality star, she's in the midst of a stressful custody battle concerning her three young kids, Jace, 9, Kaiser, 4, Ensley, 2, and her stepdaughter, Maryssa, 11.

To Evans' disappointment, Mother's Day this past Sunday didn't go as smoothly as she had hoped. Instead of celebrating with all of her four kiddos, Evans spent the day with her youngest, Ensley, and the family's goat. "It wasn’t the cookout I expected and planned with all my kids, but I did receive plenty of flowers and a milking goat stand," Evans captioned a since-deleted photo shared to Instagram, according to Yahoo.

As for the whereabouts of Evans' other kids, Jace was reportedly with his legal guardian, grandmother Barbara Evans, while Kaiser was with his paternal grandmother, Doris Griffith. It's not clear whether Maryssa was with Evans and Eason at their home in North Carolina, or if she was with another relative.

Kaiser, per Evans' interview with Us Weekly, was taken by Child Protective Services (CPS) on Friday, May 10, as the organization completes its investigation into Nugget's murder.

“Kaiser was taken from his daycare by his grandmother [Nathan Griffith’s mother, Doris] with no notice or call to me,” Evans told the publication. “CPS told Doris to take Kaiser without my consent and still have no legal paperwork signed by the judge stating my kids are taken from me.”

In regards to Jace, TMZ reported that Evans' eldest isn't allowed to visit his mother's home until CPS gives the OK for him to do so.

As if this wasn't troubling enough for Evans, Ensley and Maryssa were reportedly removed from her home on Tuesday, May 15, according to TMZ.

“Ensley has been placed,” an alleged insider told Radar Online. “Maryssa has also been taken.” The source also claimed that Jenelle was granted supervised visits with her kids.

“Jenelle is meeting with the kids at social services this afternoon,” the insider said. “It is supervised visitation. She asked, and they are going to allow it."

Evans did not immediately respond to Romper’s request for comment regarding the CPS investigation, while Eason has yet to respond for comment concerning the murder of Nugget.

In response to the recent events concerning her children, Evans told People in a statement: “During this difficult time, I’m focused on getting Kaiser back and cooperating with my legal team on the next steps to getting my children back."

Of course, the safety of Evans' kids is the most important thing here. And while it's not yet obvious how this case will play out, it's clear that the Teen Mom 2 star is in the midst of serious battle concerning the custody of Jace, Kaiser, and Ensley.