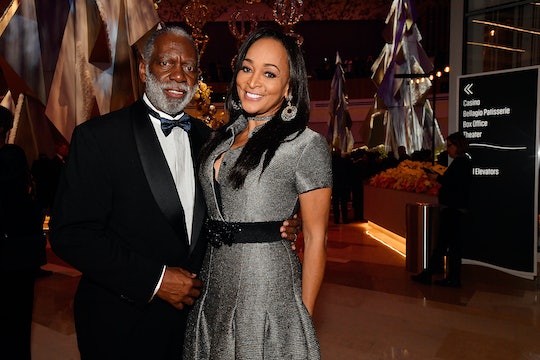 Karen Huger's Husband Has Had An Impressive Career

There has been so much discussion on The Real Housewives of Potomac recently about Karen Huger's financial situation and her house, so it's only right to wonder what Karen Huger's husband's job is and why the women are so curious about what's going on with their bank accounts. Hey, The Real Housewives franchises are all about wealthy families right? Knowing where they get their money is half of the fun. And the Huger household is definitely no exception.

As it turns out, Karen's husband, Raymond, is a pretty accomplished man in his own right. And you don't just have to take my word for it. As I've mentioned before, Raymond has an extremely impressive net worth. But this money wasn't just handed to him. He's worked hard throughout the years for what he has. After college, Huger went to work at IBM for 25 years. Then he left and started his own company, Paradigm Solutions. He started the cyber security firm with basically nothing until he nurtured it into a huge business.

Paradigm eventually was doing up to $60 million in annual sales when Huger took his company public in 2004. He later sold the company to CACI, a government contractor that deals with national security, but still sits on the board. He doesn't have a current listed career right now, but he likely still has some involvement in the tech industry as a consultant — Huger doesn't seem like the kind of guy who just retires.

The Hugers are super tight, which might be a result of them having met in their 30s, after establishing their careers. Karen told The Daily Dish that they met at the Black Caucus 22 years ago. "I actually recently divorced, like two years prior to meeting him," she explained. "And we were at a formal event, and he asked me to dance. And he took me in his arms, and I swear to God, he was making this noise in my ear, but when he took me in his arms I knew." She added, "I didn't even see Raymond physically. I just felt him spiritually. And we've had that connection for 22 years."

Who cares what the guy's job is, really, if he makes his family that happy? The Hugers are definitely a solid couple, no matter where they live or what they do. Here's to 22 more years, to these adorable lovebirds.