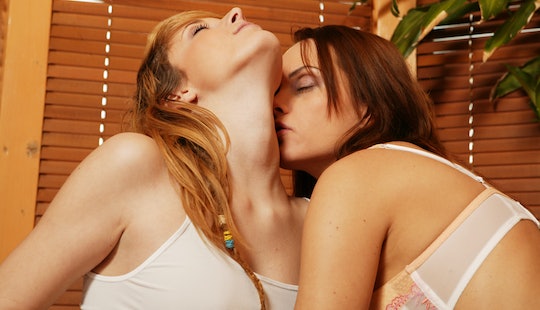 What Is Maintenance Sex? It Plays A Huge Part In Your Relationships

They say relationships take work and they (whoever they are) are 100 percent correct. You have to make time for your SO, you have to put in an effort to re-connect and strengthen your bond, and you have to keep up with maintenance sex. What is maintenance sex? Hey, I'm glad you asked — it's not as boring and non-erotic as it sounds And you know what — it's pretty necessary.

Women's Health described maintenance sex as the sex that connects you and re-affirms your bond as a couple. Basically? The sex you're most likely having every week. When you hit the bed at 11 p.m., worn out from your day, but still want to get it on? That's maintenance sex. It's the sex that makes up most of your sex life, meaning there aren't always toys involved or crazy positions or a ton of foreplay. Maybe you do it in between re-runs of Friends or maybe you make out for a few minutes and then have oral sex to get each other to orgasm.

The point is, this is the sex you're having so that you two stay connected to each other. Essence noted that this is the sex that strengthens the emotional and physical bond between you and your partner. It's the sex at the end of the night, when maybe you and your SO are just now getting some alone time. And, despite it's not-so-sexy name, it can still be hot, wonderful sex.

Of course, nobody should have sex if they truly don't want to. But as Jezebel pointed out, it's not always possible for your sex drive to align with your partner's. There will be days when one of you is into sex and the other isn't. There will be days when you don't really feel like getting it on, but you'll remember that it's been a couple of days, so you'll just go for it.

It most likely won't be mind blowing sex, but it's the sex that leaves you satisfied, happy, and feeling closer to your partner. Does it replace all sex? No. In fact, some therapists think it's the worst type of sex, according to the Huffington Post. Some argue that maintenance sex is used just to satisfy a male partner and that women believe sex is sex to men, that there doesn't need to be anything other than an orgasm.