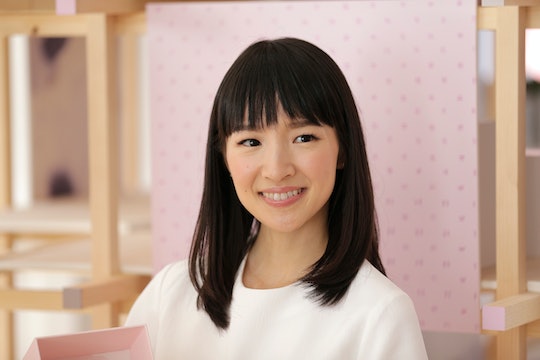 If you follow astrology at all, you know that our personalities and interests are said to be guided by the position the planets were in when we were born. It's why we might say, "He's such a Taurus" about a late-April-born child with a stubborn streak, or why an actor might credit their Leo sign to their love of performing. So we might wonder how big a part Marie Kondo's zodiac sign plays in her mission to teach the world how to find happiness through decluttering. Could her calling have been written in the stars?

Astrologers would likely say a rousing "yes." According to Famous Birthdays, Marie Kondo was born on October 9, 1984, which puts her squarely in the sign of Libra (September 23-October 22). Like the Scales that symbolize the sign, Libras thrive on balance and harmony, and seek justice for themselves and the world at large. They're also "the aesthetes of the zodiac," explained Allure, appreciative of fine art and of beautiful surroundings.

Hardly surprising, then, that Kondo would be so passionate about helping people make their homes a haven of attractive order and simplicity. As The New York Times reported, Kondo was reading magazine articles on organizing from an early age, and even used to go into her siblings' rooms to tidy up.

Libra is one of the three air signs of the zodiac (the others being Gemini and Aquarius), and air-born people are intellectual and all about communication, according to Zodiac Fire. Libras love to socialize and share their thoughts and ideas with others, with a charm that makes them highly persuasive without being too pushy. Perhaps it's that Libra influence that gives Kondo her winning personality and gift for writing; her book The Life-Changing Magic of Tidying Up became an instant bestseller here and abroad, and millions tune in to Netflix to watch her series on eliminating clutter.

Perhaps one of the most telling of Kondo's Libra traits is her now-famous advice to keep only the belongings that "spark joy" in our lives. For Librans, a tidy home isn't just about cleanliness, but also about the pleasure that comes with being surrounded by meaningful objects and wearing clothes that look and feel good. Scales-born people also prioritize others' happiness, added Allure, so it makes sense that someone like Kondo would be drawn to a career that helps so many people find satisfaction in their lives.

Even her organizing techniques have a typically Libran flair. As the Times article explained, Kondo recommends arranging clothes by type (shirts with shirts, etc.) and color (dark on the left, light shades on the right). Talk about harmony and balance! "Clothes, like people, can relax more freely when in the company of others who are very similar in type," her book asserts.

In addition to being an air sign, Libra is one of the four "cardinal" zodiac signs (as opposed to the "fixed" and "mutable" signs). Dynamic and natural leaders, cardinal signs are "the trendsetters and trendspotters, the ones who get the party started and the crowd hyped," according to AstroStyle. Is it any wonder, then, that in just a few short years, Marie Kondo got us all tossing out our old coffee mugs and folding our T-shirts into neat upright rolls? Her name has even become a verb (as in "I KonMaried my desk, and now I can find everything"). If that's not a sign that you've made a mark on the world, what is?

Other planetary influences may have had a say in Kondo's success, too. The website Star Sign Style took a look at her full astrological chart and found that the moon was in Aries at the time of her birth, "a planet of action" that portends "a fresh, pioneering quality." She also has a Mars in hard-working Capricorn, indicating a personality driven to achieve her goals.

Might Marie Kondo be a household name if she'd been born a Sagittarius or a Pisces instead? Of course. Every sign of the zodiac can boast plenty of famous people. But being a harmony- and serenity-loving Libra might very well have tipped the scales, so to speak, on her choice of career. For that, her legions of fans can be thankful that the planets aligned the way they did on that October day.