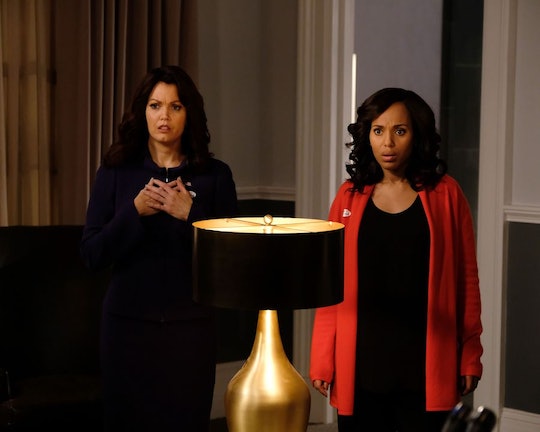 The only way we’ve ever known Mellie and Fitz on Scandal is as a political couple. Even when he was running for office the first time around, she was by his side on the campaign trail and ever the dutiful soon-to-be first lady of the United States. But in the upcoming 100th episode, things are going to be shown as if he had never won in the first place, so what is Mellie doing in the alternate reality on Scandal?

In the promo for Thursday night's episode "The Decision," Mellie isn’t even anywhere to be found except in the meeting she, Olivia, Cyrus, Hollis, and Verna had held once upon a time to agree to rig the election for Fitz. So assuming Fitz loses the election, does Mellie leave him? Or does his own personality take such a nosedive because of the loss that Mellie has no other choice but to leave him? Then again, maybe Mellie was always meant to be the politician herself and it’s she who becomes the one in their marital relationship who has all of the political power.

The promo for the alternate reality episode of Scandal also shows Olivia in a wedding dress, but seeing her and Fitz end up together in marital bliss would be too easy. Without Fitz in the Oval Office, that would mean that Cyrus wouldn’t have become his right hand man and if that happened, Mellie’s own life would have been drastically changed too.

As viewers saw during Season 2 of Scandal, Olivia and Fitz’s attraction began when they met on the campaign trail and she worked with him after being called on by Cyrus. Eventually, Mellie found out about the two of them and their years-long affair, but Mellie and Fitz stayed together for a long time afterwards in order to keep up appearances. So if the election was never rigged on Scandal and Fitz didn’t become president, does that mean he and Mellie would have been over long before they divorced in the real timeline?

Mellie has always wanted to have a place in office, but if being the president’s wife is what really sparked that in her, she might not have ended up as a presidential candidate after all if Fitz was never elected. Tony Goldwyn (who plays Fitz) spoke to Entertainment Weekly about the outcome of Scandal’s "what if" episode and how Olivia refusing to rig the election really would have changed everything.

"It’s something of a study of how the circumstances of our lives shape our identity, how we see ourselves, and how we present ourselves to the world," he said. "It’s subtle, the difference, it’s just really interesting who he is and what he struggles with."

The same can likely be said for the rest of the characters, who are probably going to be in very different places in life when the show looks at what might have come of the core cast, if that huge (and highly illegal) decision had gone in a different direction.