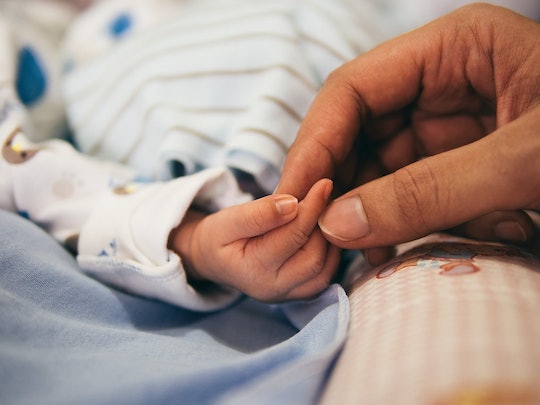 Modified Co-Sleeping Vs. Unmodified — You Decide

When it comes to being a parent, there's no exact manual to follow. Although you generally know which things are "good" and "bad" as a parent — like giving lots of love instead of yelling — a lot of parenting is simply modifying an idea to fit what you and your children need, including sleeping arrangements. Co-sleeping is a hot topic for many parents, but there's plenty of room for modifications. But what is modified co-sleeping versus unmodified? It's simpler than you may think.

Think about what it means to co-sleep. It doesn't necessarily mean you're bed-sharing or giving up half of your room for an infant nursery. According to Kelly Mom, co-sleeping really just means that you're sleeping in close proximity to your child. Whether that means your little one has a bed attached to yours or is sleeping in their own separate cot across the room, it's up to you.

And this is where modified versus unmodified comes in. You can modify almost anything when it comes to parenting, but especially co-sleeping. Unmodified co-sleeping seems to follow the most basic idea of co-sleeping — you're sleeping in close quarters with your baby. Technically, bed-sharing is separate from the term co-sleeping, but co-sleeping can include your little one sleeping on the same surface as you.

Modified co-sleeping means making it work for you. Dr. William Sears wrote for Parenting that those with co-sleeping worries go for a modified co-sleeping arrangement, like having a bedside co-sleeper so that your little one has their own surface to sleep on, but they are still within arm's reach.

But you can also modify your co-sleeping to have your little one on the other side of the room. According to the Mother-Baby Behavioral Sleep Laboratory at University of Notre Dame, room-sharing is also a form of co-sleeping. You can have your baby sleep in a crib, bassinet, or cot in the same room as you and be considered a modified co-sleeping family.

It's all about figuring out what works best for you. Many families appreciate co-sleeping so that their baby is nearby when they are hungry and so that they get more sleep, but may be wary of sharing a bed with a baby or keeping them so close. There aren't any rules about how your co-sleeping arrangement has to go, as long as you continue to follow safe guidelines, no matter how much you modify your co-sleeping.