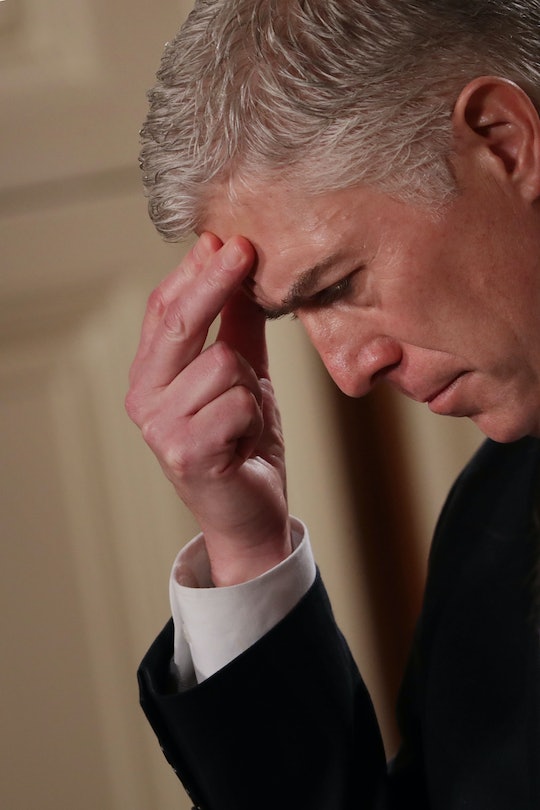 Neil Gorsuch May Be Getting A Sweet Raise

President Trump finally announced his nominee for the vacant Supreme Court seat on Tuesday, and it wasn't exactly a big shock. Denver Circuit Court Judge Neil Gorsuch is officially the youngest nominee for the Supreme Court at 49-years-old, meaning he could be sitting on the bench until the 2050s, if he eats lots of veggies. As for Gorsuch's net worth? The guy could be getting a pretty awesome raise if he gets confirmed for the gig. But that's a big "if," so if I were him, I wouldn't start shopping for a new car just yet.

Not that Gorsuch was exactly starving to death before the big announcement, of course; The man is a real jack-of-all-trades. According to his 2015 financial disclosure, he received $26,000 for teaching at the University of Colorado Law School and around $5,300 in book royalties. Gorsuch, a married father of two daughters and an avid outdoorsman from Colorado, also has a wide range of investments that amount to upwards of $7 million dollars, according to Law.com. He holds bonds and mutual funds through USAA, as well as several municipal bonds in Colorado. If Gorsuch does manage to land a confirmation as a Supreme Court justice, he will be able to add an annual salary of $249,300 to that bounty.

To be fair to Judge Gorsuch, Democrats planned to filibuster anyone chosen by President Trump long before his name was mentioned. As Sen. Jeff Merkley from Ohio told Politico:

This is a stolen seat. This is the first time a Senate majority has stolen a seat. We will use every lever in our power to stop this.

Oddly, after Republicans famously refused to "do their job" for 10 months, squandering Garland's valid confirmation and smugly waiting out Obama's presidency, White House Press Secretary Sean Spicer took Democrats to task for (you guessed it) "playing political games," in a recent statement:

Before they've even heard who this individual is, you've got some of them saying, absolutely no. The default used to be, unless qualified, confirmed. And it is now going to, always no. And I think that's a pretty sad message.

Sad message or not, it's unclear why the Republican party would possibly be surprised by the Democrats' reaction after snubbing Merrick Garland for 10 long months.

If these "political games" continue, it looks as though there could be a vacant seat in the Supreme Court for some time to come. But the real question is; who gets the big pay when no one is there?