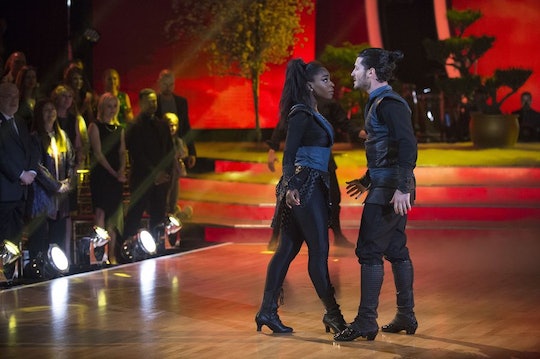 Normani Kordei's Net Worth Is Impressive

Every season on Dancing With the Stars, there are certain contestants who you can tell, right from the beginning, will go far. Fifth Harmony member Normani Kordei has gotten great scores so far this season, which hasn’t been a total surprise, since she’s already a performer. But thanks to all of the singer’s accomplishments, what is Normani Kordei’s net worth exactly? The DWTS contestant has been a part of Fifth Harmony since they formed on The X Factor back in 2012, but she’s also an experienced dancer and gymnast. And, according to Celebrity Net Worth, Kordei’s net worth is $3 million.

The 20-year-old DWTS contestant is obviously already so accomplished and if she and partner Val Chmerkovskiy can make it to the finals this season and take home that Mirrorball trophy, it’ll be another thing for the singer to have under her belt. After Kordei’s initial performance on the season premiere of Season 24, she’d already wowed the judges. Even though she scored a 27 out of the possible 40, Bruno Tonioli said she was “crackling with energy” and the duo’s scores have only gotten better from there.

Maybe it’s all thanks to her experience as a performer already, but Kordei has seemed like a pro from the beginning of the season and for Week 5 she scored 39, which is the closest she’s come to a perfect score so far this season.

Fifth Harmony’s second album, 7/27, came out with the single “Work From Home” which ended up being a three times platinum certified single all on its own. It also rose to the top of the Billboard charts in the categories of Billboard Rhythmic and Pop Songs. Their recent single “Worth it,” featured on the Fifty Shades Darker soundtrack, has gone platinum four times over. And do I have to say again that Kordei is only 20 years old?

The DWTS contestant doesn’t really need to prove herself, but it totally seems like the second half of the season is going to be a cakewalk for the singer. Kordei has been in show business for most of her life and certainly all of her adult life so far, so excelling on DWTS with Chmerkovskiy by her side might have been expected, but it’s still been inspiring to watch her fluid and precise movements across the ballroom floor.

Season 24 of DWTS still has six episodes to go, with plenty of room for falls or slip-ups, but Kordei’s moves and performance have only gotten stronger as the season has gone on. It’s safe to say that the Fifth Harmony member isn’t going to be letting her group down anytime soon.

More Like This
New Barney Docuseries Will Dive Into The Dark Side Of The Beloved '90s Kids' Show
You Can Stay At A ‘Hocus Pocus’ House On Airbnb — And It’s In Salem!
Every State’s Favorite Halloween Movie For Kids In 2022
10 Kid-Friendly Halloween Episodes From TV Shows Your Little Vampire Already Loves