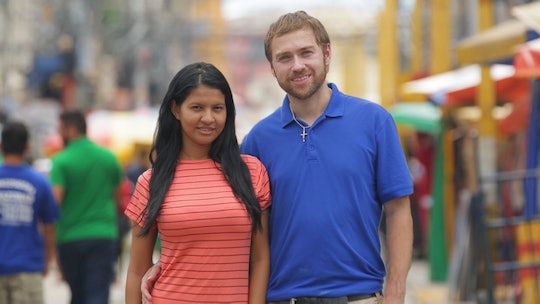 Paul From '90 Day Fiance: Before The 90 Days' Has A Criminal Record

When you meet someone online, you don't necessarily know everything you need to know about the person at the other end of the line. Take, for example Karine and Paul from 90 Day Fiancé: Before the 90 Days. On the show, Paul revealed that he has some serious skeletons in his closet, but it looks like all will finally be revealed in Season 2. So, what is Paul’s criminal record before 90 Day Fiancé: Before the 90 Days? Last season he admitted, "One of the relationships I was in ended so badly, it ended up getting me in some serious trouble. And I haven’t explained it all to Karine yet." He was likely referring to his legal troubles.

Starcasm reported that in 2007, he was accused of second degree arson, or more specifically, Burning Personal Property To Defraud Insurer. He wasn't convicted until 2014, according to the outlet. The charge itself is pretty straightforward. As the name would suggest, Paul’s alleged arson charge stemmed from him either setting fire or helping to set fire to property in order to gain insurance proceeds afterward. On the show, Paul admitted as much to Karine and his potential in-laws. He also revealed that he and his ex-girlfriend took out restraining orders against one another. "Roughly ten years ago I was accused of burning my own property. And I was Incarcerated pending trial for 18 months until I took a plea agreement and got on probation," he said, going on to explain the second charge, "My ex girlfriend and I both took out restraining orders against each other. And I ended up sending her a text message, which directly violated that order. So I got locked back up over it."

Paul’s arson charge is the most notable and seems to appear in online records, there are also records indicating that someone with the same name and general Kentucky location was charged with another crime.

Starcasm also reported that in 2013, Paul was allegedly charged with violation of a Kentucky emergency protective order from an alleged domestic violence incident. In an arrest warrant that Paul allegedly posted on Facebook but may have since deleted, it says that Paul "unlawfully sent text messages" to his ex, who had filed the protective order against him. Either way, Paul has some major explaining to do this season on 90 Day Fiancé: Before the 90 Days. Outside of what he has said on the show, he hasn't spoken out about the arrest or his reported criminal past at all.

Paul did admit during Season 1 that his past relationships didn't all end so well. "One of the relationships I was in ended so badly, it ended up getting me in some serious trouble," he said at the time. If Karine is really going to marry him, I would hope that he spills any and all details of his past before they take that very big step. So far, he's been open with her this season, even going so far as to bring his criminal record with him to Brazil to show her family.

Paul’s past before 90 Day Fiancé: Before the 90 Days doesn't seem to have put much of a strain, if any, on his relationship this time around. As recently as August 1, he posted a photo of Karine on Instagram in bed with snacks and the caption: "Enjoying some American grocery store items." So not only is the couple still together after he revealed some of his past to her during Season 2’s filming, but they also appear to be in the U.S. now.

Judging by the preview for Season 2, Paul’s criminal record is going to be a major plot point for the couple. At one point he says, "I really feel like I’m in a police interrogation room again." But since Karine has every right to know the details of his past, it’s totally necessary to tell her the truth. As to be expected, they look like they’re going to be putting it all out on the table as they move their relationship forward. I would try to guess whether or not the revelation does any damage to their relationship, but from Paul’s Instagram posts, they’re clearly still together.