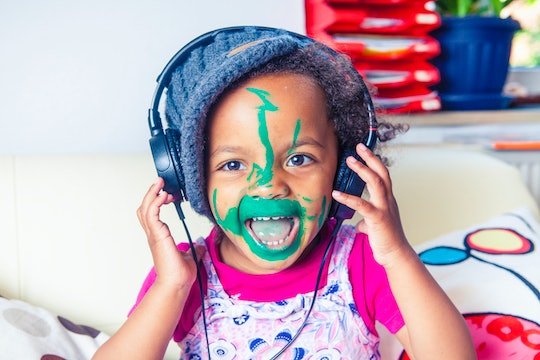 Few things are as cute as a little kid singing one of their favorite songs (yes, that even includes "Baby Shark"). Unfortunately, as tots grow up, they become more self-conscious and less likely to belt out a tune for no apparent reason. So what is peak singing age for toddlers? You'll want to take all the videos you can before this melodic moment passes.

"Singing evolves in phases," Richard Peterson, CFE, the chief academic officer at Kiddie Academy, tells Romper. Kids are attracted to music from the time they are born, possibly even before since their ears are fully developed about halfway through pregnancy, according to What to Expect. After birth, "musical babbling" in the first 12 months is the first sign of songs to come. As your little one grows, singing will sound like the "repetition of often heard fragments of songs" before they eventually start "using lyrics while adding rhythm." But don't expect any Grammy awards until your kid is at least 4 or 5. As early education and Montessori teacher Jackie Horton tells Romper, this phase is "the most ideal range for singing because [that's when kids] can remember and pronounce words, they understand pitch, and they also understand rhythm with a little guidance." Kindergarten is also around the time when your kid will probably stop randomly singing to themselves all the time, too, but oh, well. When they do sing, prepare to be impressed.

Even if they're not ready to compete on America's Got Talent as a toddler, encouraging and embracing your child's interest in music during their first five years of life may position them to "find it easier and more pleasurable to learn to play an instrument" when they are older and to "derive more pleasure from music for the rest of their lives," according to Primrose Schools. It's simple to to do, too, because as Horton says, "toddlers love music," particularly "any song that is interactive like 'Itsy Bitsy Spider' or even 'Whip Nae Nae'."

Parents can make the most out of this passion for singing by sharing the activity with their toddler (assuming they let you, of course). The nonprofit organization Too Small to Fail says parents can use their kids' love of music to their advantage by singing everyday activities they want them to learn like "wash your hands." Too Small to Fail also recommends "singing songs that have basic counting or rhyming patterns" as they can help "children learn basic math skills."

Whether you love the sound of your little one singing, or could use a day off from "Baby Shark," try to enjoy and benefit from the singing as much as you can in those first five years. Before you know it, your kiddo will be in kindergarten and have tons of mature and sophisticated interests... and you may find yourself missing that catchy "do do do do do" tune.