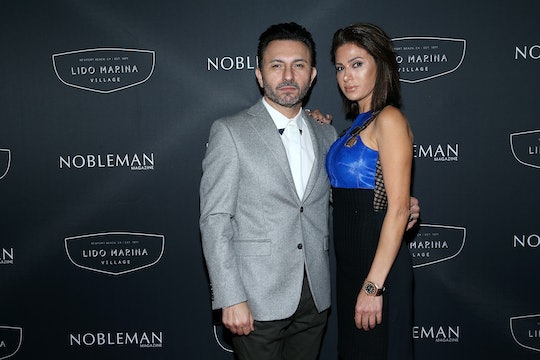 Peggy Sulahian's Husband Is Doing Well For Himself Outside Of 'RHOC'

Diko Sulahian has been stirring up some serious drama on The Real Housewives of Orange County this season, what with confronting Shannon about her pesky husband David, when everyone knows that that's sort of a touchy subject. He also made all the other women jealous by giving his wife hundreds of thousands worth of diamonds at their wedding anniversary party of 22 years. So who is this guy and what is Peggy Sulahian's husband's job on Real Housewives Of Orange County anyway?

Diko is a self made man and provides for his family by running a very lucrative company called WTW Corp, which designs and produces custom wheels and rims for luxury sports cars. You know how Peggy's tagline in the credits is all about living "the American Dream, one sports car at a time?" That's where all that comes from.

It's sort of difficult to imagine that custom wheels and rims could bring in all that money, but we are talking about clients who have Ferraris and Lamborghinis and are afraid to have them imported. It's like a super luxe version of MTV's old show Pimp My Ride. (Speaking of, I feel like they should bring that back.) Anyway, it's lucrative AF and the sole source of income for the happy family.

Diko might be a wheel mogul in Southern California, but he's also a really devoted partner. Even the other women had to put aside their differences and gush about how amazing it was that he and Peggy had been married for so long. Also, when he confronts Shannon about her husband, David, grilling him about Peggy's cancer, it doesn't seem like he did it maliciously.

If anything, he was really protective of Peggy and seemed to think that Shannon needed to know her husband was being kind of a jerk. David was being pretty rude, it's just that Diko obviously had no idea what kind of mess he was stepping into by bringing up David to Shannon and all of that. (Not the time, Diko, not the time.) But who knows. Shannon wrote in a blog for the Daily Dish after the anniversary episode that her vibe was different:

I'm pretty much over people continually accusing me, or those close to me, about things that have never happened. But this is just an example of the Sulahians trying to stir things up. And Peggy says she wants all the women present in my conversation with Diko so I don’t twist things around??? I had no idea any of this utter nonsense was an issue. You can see it in my face the entire time.

Who knows what Diko was trying to do. Dealing with Peggy's diagnosis and surgery was obviously tough for him to handle, so even if David was well meaning with his questions, it could have been interpreted differently by him since they're still sort of going through it. Diko told the Daily Dish:

It's almost like a man cutting his manhood off, you know. Like her breasts are removed. It breaks my heart. I remember one day about a week after she did that and it just crushes me to think about this. She was really down on herself … She just got out of the shower and she was really upset. She opened up her robe and the expanders were really flat and she was just crying, saying ‘Look at me.’

He added, "She felt like she was a monster looking in the mirror at herself. She was devastated, crying like ‘What's going on?’" Getting a double mastectomy is not easy and viewers are still watching some of the aftermath of it. It makes sense that both Diko and Peggy are sensitive about the whole situation.

Only time will tell how things will end between the Sulahians and the Baeders, but I hope that both families are able to work things out.