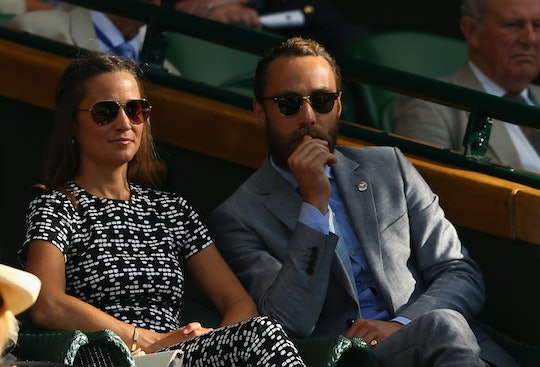 Pippa Middleton Is No Stranger To Royal Nuptials, But Will She Be Involved In Meghan Markle's Wedding?

At Prince Harry and Meghan Markle's wedding, there's a lot of familiar faces to be on the look out for. It's clear that Prince William and Kate Middleton will be in attendance, but the etiquette becomes a little less clear when it comes to Kate's sister. Now, people are wondering: what is Pippa Middleton's role in the royal wedding, or will the famous, former, maid-of-honor skip this event?

Pippa is no stranger to attending royal weddings. Back in April of 2011, she was maid-of-honor to her sister, Kate, helping her walk down the aisle. It was at this wedding that Pippa made headlines, noted for holding her sisters train and executing all the fine details that's commonly expected of family to keep track of.

It was a no brainer that Pippa would be present at Kate's wedding, but for Prince Harry and Meghan Markle? The happy couple invited around 600 guests to their celebration, according to Express, although they have been quiet about who exactly made the guest list. However, Prince Harry and Meghan Markle did attend Pippa's wedding reception in May of 2017, so it doesn't seem like there's any long-standing animosity that would leave Pippa without an invite.

While there's no way to confirm that Pippa will be present at the wedding, many are taking Prince Harry and Meghan Markle's presence at Pippa's own wedding to speculate that she will make an appearance at theirs, too.

In the past, Prince George attended aunt Pippa's wedding, acting as a pageboy. Recently, the names of the rest of the bridal party were released and, according to Today, Prince George will be in attendance as a pageboy at Prince Harry and Meghan Markle's wedding, along with his sister, Princess Charlotte, as one of the young bridesmaids.

Knowing that all the children (excluding, of course, Prince Louis) will be present, as will the rest of the royal family, it makes sense to guess that Pippa will be in attendance as well. Although she didn't officially marry into the royal family herself, she's still part of the larger, blended extension, and she hasn't been kept away from high profile events before.

Unlike Prince William and Kate Middleton, who had to play politics at their wedding given Prince William's position as second in line for the throne, Prince Harry and Meghan Markle have a little more freedom with their guest list. According to Express, royal commentator Richard Fitzwilliams said, "I don't think any particular rules apply here and I don't think there will be the slightest chance that anyone would upstage Meghan at her own wedding."

And it's true; since Markle is the first American princess, it would be extremely difficult for anyone to draw attention away from her on her own wedding day. Fitzwilliams also told Express that it was likely Prince Harry and Markle will return the favor by inviting Pippa to their wedding, if they know each other well enough.

Now, some might be disappointed to hear that Pippa doesn't have any confirmed role in the wedding. Royal weddings, though, typically have a lot of their roles predetermined. Instead of having what Americans consider typical bridesmaids and groomsmen, royal weddings usually have children in the roles of bridesmaids (or flower girls) and pageboys.

Markle could have opted to shift tradition by appointing older bridesmaids or a maid of honor, but she chose not to instead. “She has a very close-knit circle of friends and she didn’t want to choose one over another,” a palace spokesman said, according to People, with regards to choosing a maid of honor. “All have been actively involved in helping her prepare for the day and will be there in the days beforehand. She’s very happy to have their support.”

If Markle chose not to give her close friends defined roles, then it was always pretty unlikely for Pippa to have one.

But, a role doesn't define a relationship! Right now, it seems very likely that Pippa will be in attendance at the royal wedding, and that's what really counts.