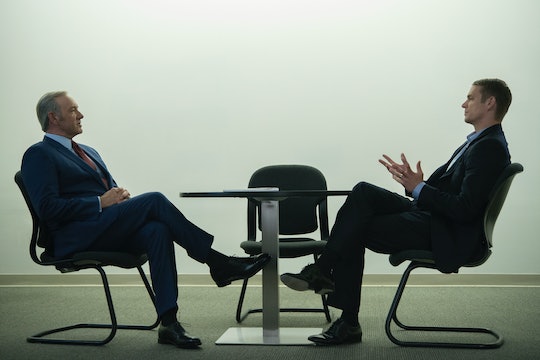 What Is Pollyhop On 'House of Cards' Season 4? It Could Be A Game Changer In The Election

When you hear "rock star" on House of Cards, you're probably not thinking about Donald Blythe, the Vice President who could barely hold it together for his quick stint as Acting President. No, when House of Cards is talking about a "rock star," its referring to the Governor of New York and Republican candidate for President, William Conway. He's handsome, he's young, he even served in the U.S. Air Force after 9/11. He takes selfies with just about anyone who asks, has a strong social following, and an even stronger jawline. And, he is navigating Pollyhop like a boss. What is Pollyhop on House of Cards, you ask? It's a potential game changer for the upcoming election.

Think of Pollyhop as Google — it's a fictitious search engine. William Conway is using the data on Pollyhop, to look into what people are searching, where they are located, and who they are to manipulate their votes. As Leann's inside guy, Aidan, tells her, Conway has manipulated Pollyhop's search engine to make it seem like he is top dog. And once people see he's already winning... well that's half the battle, right? He is force-feeding himself to the voters, and they're lapping it up. As Aidan warns Leann, with Pollyhop in the hands of Conway, the Underwoods have already lost.

Conway has voters in his pocket, with both the young vote and the military vote. Plus, he understands manipulation on a much larger scale than the Underwoods — which, at one point, seemed impossible. In the beginning, he's making the Underwoods look a little stale. He and his wife are getting it on first thing in the morning on the bathroom sink while Frank is taking his meds in the White House in an old dude white undershirt. There's a gap here, if you're not picking up on it.

There was a point I was worried about Frank's position, until I remembered he has Leann Harvey. (Side note: can we all agree that Neve Campbell is killing it?) Leann has the perfect reaction to Conway's relationship with Pollyhop — out him. Unfortunately, Conway has figured out a way to manipulate Pollyhop in his favor.

In a brilliant webcast with Pollyhop CEO, Benjamin Grant, Conway invites voters into his everyday life. He offers voters something the Underwoods would simply never do — full disclosure and transparancy. Every email, every video, everything is now at the hands of voters, which people are really into. Looks like Frank has finally found a worthy opponent.