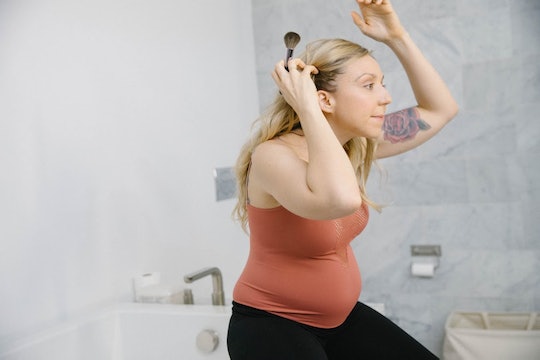 Guys, It's Time To Talk About Pregnancy Nose

When I was about 8 months pregnant, I was getting my hair done for my maternity pictures and my hair stylist remarked how great it was that I didn’t have “pregnancy nose” yet. As this was my first pregnancy, I was kind of taken aback, because I’ve had people remark about how pregnant looking everything else was becoming on me (thanks a lot, jerks), but never my nose. I’ve always had a rather large nose anyway — so then I got worried. After smiling and nodding awkwardly at my hairstylist I thought, “What is pregnancy nose? Please dear God don’t let my nose get any bigger than it already is.”

So what in the world does the size of your nose have to do with pregnancy? Like every other thing that happens to your bodies from pregnancy, your nose grows when you’re pregnant because of those pesky hormones. “Pregnancy nose is the result of elevated circulating hormone levels,” Abdur-Rahman explains. “Many of the hormones of pregnancy (e.g., estrogen, progesterone, and beta HcG) cause smooth muscles to relax.”

Having your “smooth muscles relax” is a pretty important part of a healthy pregnancy since your uterus is basically a large smooth muscle, Abdur-Rahman says. “During pregnancy, as the uterus enlarges and as the uterine muscles are stretched, they tend to want to reflexively contract. Contracting too early however would cause contractions, preterm labor and potentially pre-term delivery. So, high circulating levels of the pregnancy hormones (estrogen in particular) helps to relax the uterus and prevent it from contracting too early in the pregnancy,” he says. And since all your smooth muscles relax, this means the muscles around your blood vessels also relax, which causes the vessels to enlarge — including the blood vessels in your nose. Ever wonder why most women have stuffy noses throughout their pregnancies? This is why. And it is also why pregnant women are more prone to nosebleeds, since they’re more prone to nasal congestion.

So are you doomed to have a larger nose forever? Welcome to the club, guys. (Just kidding.) Luckily, your nose does return to pre-pregnancy size once all the hormones are out of your system. This is typically four to six weeks after delivery, Abdur-Rahman says. However, as far as the old wives' tale about pregnancy nose meaning you’re carrying a boy? Definitely false. “The old wives' tale linking the size of a pregnant woman's nose to the gender of her baby is false. Regardless of the gender of her baby, pregnant women produce large amounts of the pregnancy related hormones. And for the most part, the levels of these hormones do not significantly vary from baby gender to baby gender," Abdur-Rahman explains.

So thankfully, pregnancy nose is just your nose getting bigger because of estrogen relaxing your smooth muscles and then making your blood vessels enlarge. But also thankfully, this pesky part of pregnancy goes away about four to six weeks postpartum. No need to worry — sit back and relax while you can.