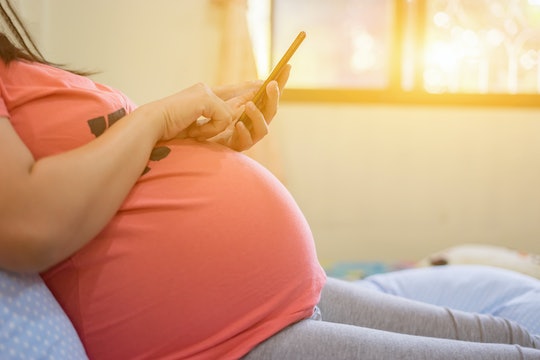 Hands Down, This Has Got To Be The Weirdest Pregnancy Symptom

When it comes to pregnancy, I'm the kind of mom that other mothers love to hate. (But please don't.) Specifically, I went through two pregnancies with relative ease, and no freaky or annoying symptoms. I had exactly one moment of nausea in the combined 18 months, and that lasted approximately 20 seconds. I didn't develop brown skin patches, extra hair growth, sinus problems, dizziness, constipation, or even a pregnancy condition called ptyalism. About the oddest thing I can recall was my uncontrollable sobbing every time I heard certain lullabies. As for cravings, they were both un-weird and ridiculously healthy — peanut butter on toasted English muffins, leafy salads with walnuts and tofu — even I disgust myself just writing about it.

But because I wanted to be prepared in case anything out of the ordinary happened, I read tons of pregnancy books and articles to find out all the possible things that can happen from the moment the test shows positive to the moment you hear the first tiny wail. And boy, are there a lot of things that can go on with a pregnant body, beyond the usual stretch marks and swollen ankles.

One of the weirdest symptoms of pregnancy has a name I'd never even heard of (and I have a lot of dictionaries). Ready? Ptyalism. It's pronounced TIE-ahl-ism, and it's a fancy and vowel-deficient way of saying "excess saliva production." Perhaps this quote from an abstract of an article in the Journal of Obstetric, Gynecologic, and Neonatal Nursing said it all: "Those who suffer from it...find it to be a little-known, but major, irritant."

Let's be clear: Saliva is a great thing — in fact, we'd be in pretty sad shape without it. Produced by the mouth's salivary glands at a rate of up to one-and-a-half liters a day, this watery substance contains enzymes, antibacterial compounds, electrolytes, calcium, and other substances that help protect our mouths against the acids that cause tooth decay and gum disease, according to a team of British doctors writing for the British Journal of Medical Practitioners. And that's not all: Saliva helps us taste, swallow, and digest food, as well as moistening the mouth and throat enough to allow us to speak.

During the first trimester of pregnancy, however, expectant moms may find their mouths constantly overflowing with saliva. Not only is it an uncomfortable sensation, it also makes for a lot of embarrassing and gross moments. Women with ptyalism describe drooling when they talk, sleeping with towels on their pillows, and having to carry tissues everywhere for a discreet spit session.

Although it may feel as though your mouth is revving up its production of saliva, this may not actually be the case. Florida OB-GYN Jose Pando, MD, told Babble that most of the time, ptyalism occurs when pregnant women suffering from nausea find it difficult to swallow the normal amount of saliva they produce. In fact, the excess drooling often happens during the first trimester, when morning sickness is most common.

Ptyalism may also be connected to another common pregnancy symptom. During the first and second trimester, heartburn often occurs as a result of a weakening of the muscle in the esophagus that normally keeps acid from backing up, according to MedicineNet. When that happens, the body protects itself by producing more saliva, which neutralizes acid, explained Oral-B.

The good news: Ptyalism has no adverse affects on the health of the baby, and typically resolves itself either by the third trimester or after birth, according to a Japanese study published in the North American Journal of Medical Sciences.

While it lasts, however, there is a risk that an expectant mom may become dehydrated, not to mention the embarrassment of going around with a mouthful of spit all the time. So if you're pregnant and concerned about producing too much saliva, try some of these suggestions:

As irritating (and yucky) as ptyalism is, it's nice to know that it will all be a distant memory once your baby is born... unlike my weepiness over lullabies, which continues to this day.