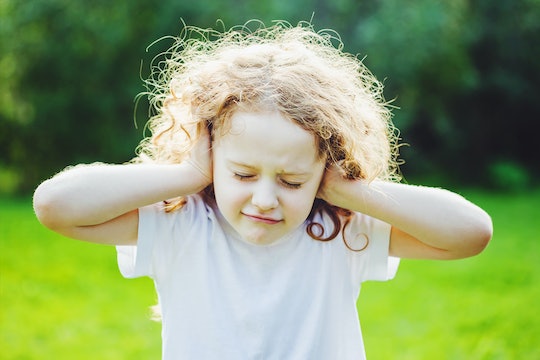 What Is Sensory Processing Disorder?

There are a lot of things to worry about with your children, but their fear of loud noises or their overreaction to the way a food feels isn't, right? I mean, kids will be kids and their pickiness and particulars know no bounds. But at some point, you may be wondering what is sensory processing disorder, and you may be wondering if your child's aversion to certain things has something to do with it.

According to the STAR Institute for Sensory Processing Disorder, sensory processing disorder, or SPD, exists when your child's sensory signals are either not detected or not organized into appropriate responses. Simply put, the nervous system receives messages from the senses any time they are used, whether it's taste from biting into an apple or sound from hearing loud fireworks. But, when there is no evidence of a sensory processing disorder, your nervous system turns them into appropriate motor and behavioral responses. With SPD, it's incredibly difficult for someone to process and act upon the information they receive from their senses, leading to problems completing every day tasks like going to school, brushing their teeth, and more.

According to Parents, the outbursts over transitioning from one activity to another or trying to introduce a peanut butter and jelly sandwich may sound like typical toddler and little kid attitudes. I mean, children aren't known for being rational, are they? But when they happen more often than usual and in situations you would never expect, it could mean your little one is suffering from sensory processing disorder.

But SPD doesn't just mean your child overreacts in certain situations. The STAR Institute for Sensory Processing Disorder noted that a child could also under-respond to certain situations and show little to no reaction to even extreme circumstances, like something feeling very hot or very cold. Some kids may even crave stimulation and it could lead to a diagnosis of ADHD when really what they are suffering from is an SPD that makes them seem addicted to a lot of intense stimulation.

According to the Child Mind Institute, these sensory processing issues are now considered a symptom of autism, but that doesn't mean every child who has SPD is on the spectrum. In fact, most aren't, but many children with autism do suffer from SPD.

Sensory Smart Parent noted that one in 20 children have sensory processing disorder — a fairly large number when you consider how many kids are in a day care, an elementary school, and even a sports team. If you think your child has SPD, you should reach out to your pediatrician to talk about your issues so you can determine if your child is simply two or if there's more going on in their brain than you can tell.

More Like This
This Is What Happens To Your Vagina When You Stop Having Sex
9 Surprising Signs You Might Have A Sugar Intolerance
Can You Do Zumba While Pregnant? Experts Weigh In
How To Properly Clean An Inflatable Pool