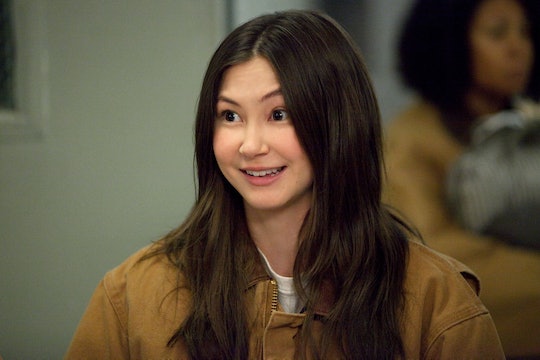 What Is SoSo's Backstory On 'Orange Is The New Black'? She Tried To Be An Activist

(Warning: This post contains spoilers from Season 4 Episode 3.) When Soso came to Orange Is the New Black in Season 2, she was like a breath of fresh air. If fresh air likes to talk a lot and is chipper to the point of wanting to strangle said fresh air. But Brook Soso was like a hippie teenage girl sent to prison, full of misplaced optimism and lots of fantasy-driven ideas about what a woman's prison should be like. But what is Soso's backstory on Orange Is the New Black? We got a taste of where she comes from back in Season 3, Episode 4 when her best gal pal Meadow comes to visit and has very much the same attitude about prison as a pre-Season 3 Soso. It basically let us know how far Soso had come as far as maturity goes and was also a little sad because it was the beginning of her feelings of total isolation that you'd be made of stone for saying it didn't break your heart to see.

The romance brewing between Soso and Poussay has been exactly what she needed though, and now that we finally have Soso's backstory, we can begin to see the reasons for some of her actions. Not much can explain her ignorant assumptions about Poussay's past, but hopefully Litchfield's new cutest couple can work through that. Which is to be expected, seeing as how Soso freaking Say Anything-ed her with the tiny boombox above her head, playing the only station that came in clear. Swoon. Until now, all we knew about Brook Soso was that she is something of a wannabe do-gooder hippie and a loud lover, a la her tryst with the lovable Nicky Nichols.

In Season 4 Episode 3, we finally learn about Soso's past. Her claim about being attracted to people, as opposed to just women or men, proves to be true in Soso's flashback, when we see her activist ex-boyfriend. We haven't yet learned about what landed Soso in prison in the first place, but that's to be expected. Since backstories and flashbacks are the bread and butter of Orange Is the New Black, it's easy to ask about the different inmates' stories and wonder, why did Soso go to jail? In her Season 4, Episode 3 flashback, Soso's past begins to be revealed and we see that while trying to be an activist, she also doesn't make the best decisions, which could be what eventually lands her in prison.

At one point in her activism career, she was working to stop a Walmart from being built, and instead wanted to petition to build a park. We even saw Soso approach a sex offender's home, hoping for a signature. She later lied about her interaction with the man to a group of fellow activists.

The good thing about Orange Is the new Black is that there is so much learn about the different characters' backstories, that we don't need to see it all in one episode and can look forward to those stories unraveling little by little. Which we'll have to do for Soso's backstory, sadly. In the meantime, let's just enjoy the only good thing happening at Litchfield right now, and that's Soso and Poussay. Soussay? Pouso? Can we get a couple name for them yet?