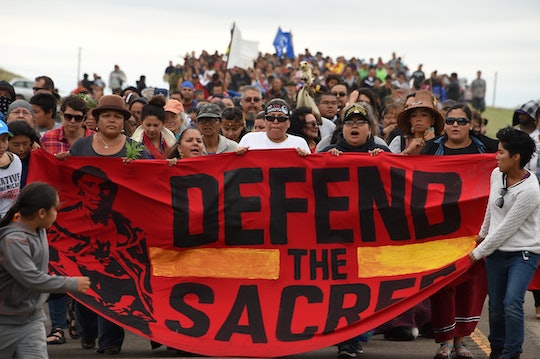 What Is Standing Rock Like On Thanksgiving? Protectors Continue To Stand Together

The Thanksgiving story is one we've heard a million times, from our earliest years in grade school: It was the winter of 1621, and the newly-landed Pilgrims in the Plymouth Colony in Massachusetts weren't going to make it through their first New England winter. The Wampanoag, the indigenous tribe to Massachusetts. Nearly 400 years later, police in North Dakota this week hosed down Native American protestors at the Standing Rock Sioux Reservation as the protest the construction of the Dakota Access pipeline. What is Standing Rock like on Thanksgiving? Despite tense clashes with police and pipeline workers, a sense of unity remains.

On Thanksgiving Day, it is cloudy and cold, a steady 35 degrees at the Oceti Sakowin camp, where the largest gathering of Standing Rock protesters have set up camp. The camp is one of many places where protesters and Water Protectors can gather, pray, and protest the seemingly unstoppable march of construction vehicles and the police who protect them. Thanksgiving is a fraught holiday for Native Americans, as they recognize Thanksgiving as a day of mourning. This year, the solemnity of occasion cannot be missed as hundreds of indigenous people and protestors observe Thanksgiving at Standing Rock.

At Oceti Sakowin, several chefs, activists, and other volunteers have arrived to prepare a massive Thanksgiving dinner for Standing Rock protesters, in a volunteer event dubbed the Wopila Feast — Wopila is a Lakota word for thankful. Over 50 volunteers will help cook and feed more than 500 people at the camp. These Thanksgiving volunteers even include actresses Shailene Woodley and Jane Fonda. Judy Wicks, the organizer of the Wopila feast, is an author and local food advocate. Speaking to Civil Eats, Wicks said,

To me, this is about a life-or-death struggle and the native people are on the front lines. I’m going to honor the values they’re demonstrating—non-violence, cooperation, generosity, respect for mother earth and for others— even in the face of these armed riot police. So bringing them this dinner is a small token of my gratitude.

Still, the irony of the Thanksgiving holiday at Standing Rock is not lost on anyone there or who supports their cause from afar. While images and stories of a Thanksgiving feast might warm the cockles, other images of Thanksgiving at Standing Rock are not so heartwarming. Many protesters are still recovering from violent clashes with law enforcement from the Morton County Sheriff's Department, who fired tear gas, rubber bullets, and water cannons at protesters in freezing temperatures on Sunday night. Warning: Some of the images that follow are graphic and may be disturbing.

For some protesters at Standing Rock, they're just thankful to be alive. 21-year-old Standing Rock activist Sophia Wilansky was shot with an unidentified "less-than-lethal" projectile by Morton County police on Sunday — and will most likely lose her arm. Speaking to The Guardian, Wilansky's father Wayne said her daughter underwent eight hours of surgery on Monday, and will require more surgeries that could include amputation: "The best-case scenario is no pain and 10-20% functionality. She’s devastated. She looks at her arm and she cries." A Gofundme that was created to help with Wilansky's medical bills has already raised nearly $350,000.

On Thanksgiving, it's easy for us to settle down in our tryptophan-induced food comas, unbuttoning our jeans, and doze off to the dulcet sounds of Thanksgiving Day football. But for the more than 3,000 protesters at Standing Rock, Thanksgiving is an entirely different matter altogether. From that first Thanksgiving 395 years ago, when the Native Americans helped the Pilgrims survive — to Standing Rock, as Native Americans and activists are shot at with water cannons, tear gas, and rubber bullets: How far we have come as a nation.